11 rolls of Marijuana retrieved from inmate at Koforidua Prisons 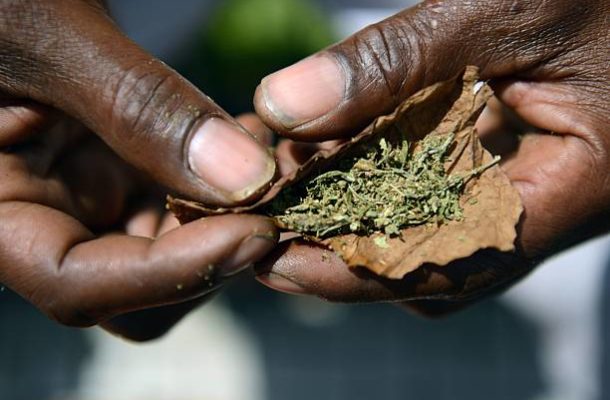 Eleven (11) wraps of dried leaves suspected to be Indian hemp have been retrieved from an inmate at the Koforidua Prisons.

Information gathered indicates that, the suspected Prisoner, Edward Asiedu, was taken out for external labour duties with other colleagues under the guard of one Lance Corporal Gusu on August 11, 2018.

A routine search conducted on the suspect after he returned to the Prison yard identified the 11 wraps of the narcotic substance.

The Director of the Koforidua Prisons, Bob Derry, proceeded to the Effiduase District Police Command to lodge an official complaint.

The Public Relations Officer of the Eastern Regional Police Command, DSP Ebenezer Tetteh confirmed to Starr News that the caution statement of the suspect has been taken which he admitted ownership of the substance.

According to the PRO, further investigations are being conducted to unravel other accomplices.

The Interior Minister, Ambrose Dery during a working visit to the Koforidua Prisons in May this year directed the Inspector General of Police David Asante Apeatu and the Director General of Ghana Prisons, Patrick Darko Missah to collaborate and come up with security measures targeted at curbing disturbing sophisticated crimes rearing its head in various Prions across the country.

“If we have criminal kingpins in there and still controlling their groups outside, it is a thing that we need to work on so I will be directing the IGP and the Director General of Prisons to work together to make sure that we come out with measures, equipment and arrangements that will make sure that we stop it.”

The pronouncement by the Interior Minister follows revelations by the Deputy Director of Prisons in Charge of Eastern region Command, DDP Isaac Kofi Egyir, that there are syndicates increasingly aiding the smuggling of contraband items and drugs into the Prison through intricate means difficult to be detected by mere physical inspection.