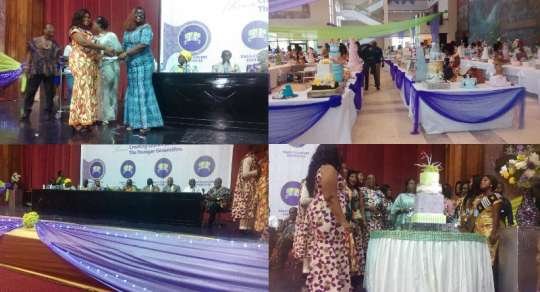 A total of 150 students, comprising two batches of students from January-June and July-December, have graduated together at the EKGS Culinary Institute's 41st Graduation and Exhibition ceremony.

Out of the 150 two-batched students that graduated, seven were males and six were foreigners, three Nigerians and three Togolese.

Mrs Efua Goode-Obeng Kyei, Director of EGKS Culinary Institute, appealed to government to come to the aid of private technical and vocational institutions.

She said operating as a private sector institution was difficult, especially with the keen competition in the industry and the influx of cheap products in the market.

"For one thing, the competition out there is keen and, sometimes, unfair, especially in the face of the influx of cheap imports and the use of inferior equipment and tools by some unscrupulous practitioners," she said.

Mrs Kyei said EKGS was playing its part in the fight against the plastic menace by doing most of their packages with paper.

She, however, commended the graduates, and wished them success in their culinary arts practice.

She advised them to act professionally to make their education useful for themselves and their families.

Mrs Christiana Okine, a Cosmologist, who was the Special Guest of Honour, commended the management of EKGS for offering alternative source of employment to the youth in culinary arts and called on the government to support vocational education since it provided employment to most youth.

"As a professional nurse, this will provide me with an alternative career to fulfil my dream in culinary art," she said.

Ms Elizabeth Frimpong, overall best student, July-December, called on government to support them with start-up capital to create their own businesses and employ others as well.

The event was chaired by Nana Otuahene Acheampong, Nkabomhene of Kumawu Traditional Area and was attended by families of the graduates and invited members of the culinary arts industry.

It was held on the theme, EKGS Culinary Institute: Creating Shared Value for The Younger Generation.