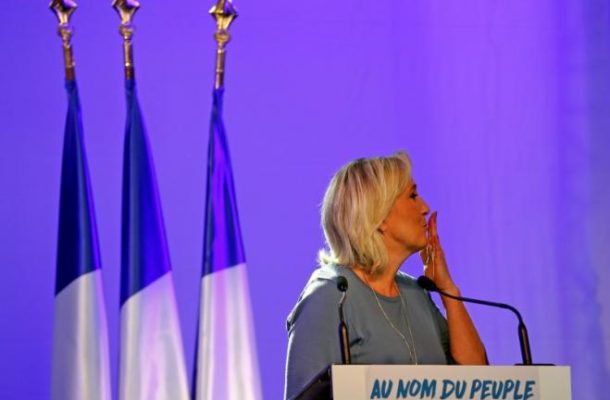 "France is not for sale," National Front party leader Marine Le Pen told supporters on Sunday, launching her campaign for the 2017 presidential election with a vow to defend national sovereignty if elected.

Opinion polls have for months predicted that Le Pen, whose far-right party opposes immigration and the European Union, will make it to the second round of the two-stage election but lose in the early May run-off to a mainstream candidate.

Billing herself as "the candidate of the people," Le Pen insisted throughout her speech that "France is not in the hands of the French anymore."

"This 2017 election is a harsh choice between on one side France - its sovereignty, its identity, its values, its prosperity - and on the other side a country we would not recognize anymore, that would have become foreign to us," she told a crowd of about 6,500 who chanted "We will win!"

The crowd booed at the mention of supposed orders to Paris coming from "Berlin, Brussels and Washington" and Le Pen praised British voters for voting in June to leave the European Union, saying she could not wait for France to do the same.

At that, the crowd broke into cheers and rounds of the party's trademark chant "On est chez nous!" (This is our home!)

Le Pen devoted much of her speech to slamming immigration and "politico-religious habits coming from abroad" - a veiled reference to Muslims - but did not mention Islam or Islamists.

That appeared to be part of her strategy to appear more moderate than her father, party founder Jean-Marie Le Pen, to attract more mainstream support and possibly even woo some Muslim voters disillusioned with the traditional parties.

Le Pen also did not mention any of her likely opponents in the race during the speech, which was heavy on rhetoric about sovereignty but light on actual policy plans or details.

Le Pen and close aides had told reporters on Saturday she would only fully start her campaign once her opponents' primaries are over.

The center-right opposition Republicans will choose their candidate in November and the governing Socialists in January.