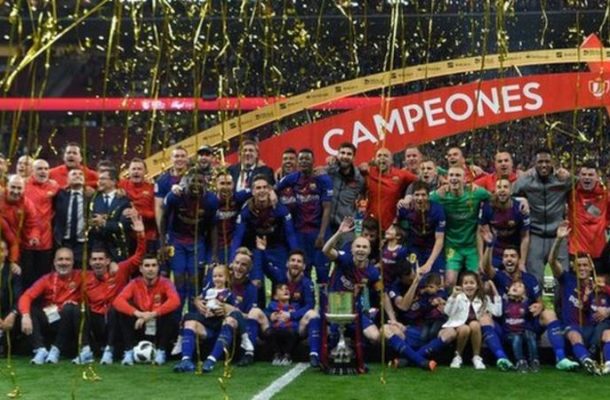 Sevilla have not beaten Barcelona in the last nine attempts

Luis Suarez scored two goals as Barcelona produced a masterclass to beat Sevilla and win the Copa del Rey final for the fourth successive season.
Sevilla were 3-0 down at half-time, Suarez tapping home Philippe Coutinho's pass to open the scoring in Madrid.

Lionel Messi doubled the lead before setting up Suarez for the third.

Sevilla, who had beaten Atletico Madrid on their way to the final, were completely outplayed in Atletico's Wanda Metropolitano.

At 1-0, Joaquin Correa missed a good chance from 10 yards out while Sandro Ramirez fired straight at keeper Jasper Cillessen after racing clear.

However, chances were few and far between as Barca eased to victory.

European also-rans but untouchable in Spain


This victory helped ease the pain of losing to Roma in the Champions League in astonishing circumstances.

Barca conceded a 4-1 first leg quarter-final lead as they lost the second leg 3-0 in Italy.

Yet there was never any doubt they would blow this game once Suarez made it 1-0 from inside the six-yard area.

Valverde's side turned on the style on the way to the club's 30th Copa del Rey triumph.

Iniesta hit the bar before Jordi Alba's sublime backheel allowed Messi to add the second, the Argentine's 40th goal for Barca this season.

Suarez produced a composed low finish to make it 3-0 before the interval.


Barca refused to ease off in the second half, Iniesta finishing off another sublime move for the fourth goal after rounding keeper David Soria.

Coutinho completed the rout from the penalty spot after defender Clement Lenglet had handled inside his area.

Meanwhile, Sevilla have not won since knocking Manchester United out of the Champions League on 13 March.