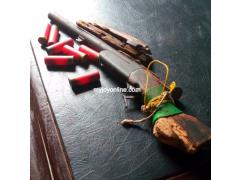 Two suspected armed robbers have been remanded in police custody by the Yeji Magistrate Court in the Brong Ahafo Region for possessing a gun.

When Usman Umaro, 27, and Hassan Mohammed, 25, were arrested by the Yeji police on Saturday, August, 13, a dismantled short gun and 7 BB cartridge concealed in a sack allegedly meant for robbery operation were found on them.

According to ASP Tawiah, the regional police command picked information which indicated that the two are believed to be armed men who have been terrorising people across the country.

He said the suspected robbers had resurfaced in the Brong Ahafo Region to operate but luck eluded them when they were arrested in Yeji upon entering the Region.

"The police had information that the two have been operating outside the Region and they sought to extend their operation to the Region but the police apprehended them as they entered the region through Yeji," ASP Tawiah said.

He added that the police in the Region are winning the fight against the armed robbers sounding a word of caution to the robbers that they can hide but they can't run.