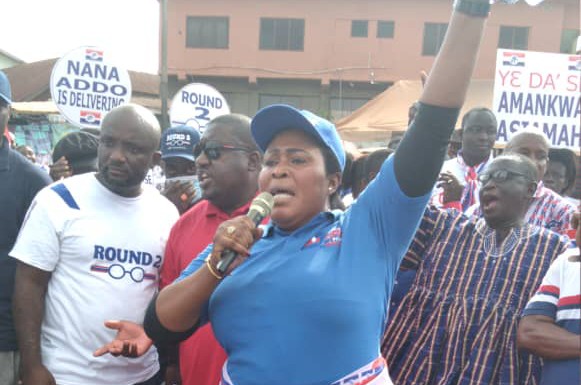 She said voting former President John Mahama and the National Democratic Congress (NDC) back to power will be a bad omen for Ghanaians as according to her, the umbrella family only good at buying Guinea fowls with monies meant for development.

Addressing the Eastern Regional Youth Wing's Mobilisation Forum aimed to canvass for votes for the ruling party, Afia Akoto said Ghanaians gave Mr. Mahama the mandate some years ago to ensure that their lives are made better but instead, he invested the country’s money in buying guinea fowls.

She said the current administration, led by President Akufo-Adfo has performed extremely better after assuming office in 2017 and therefore deserves another term of office.

She said, the President has laid a better foundation in his first term, thereby charging the party members to embark on a massive campaign ahead of the elections just so the party can maintain the seat.

She said, Nana Addo has been of help to women and the grassroots, having invested the countries finances into the future of the youth and women.

On his part, Mr Charles Wiredu, the Deputy Foreign Affairs Ministe entreated the youth in the area to embark on a door-to-door campaign to channel the good work of the NPP and Nana Addo to the entire Ghanaians.

Kennedy Osei, Member of Parliament for Akim Swedru also said this upcoming election is the beginning of the transitional process of the party and that NPP cannot afford to lose it.

He entreated the youth to get involved in the campaign as he believes they have a lot of message to campaign on for the party.

He said, the NPP government has unprecedentedly initiated 1,481 projects in the Eastern Region alone. He pleaded with the people to go to the polls and vote for the NPP come December 7th.