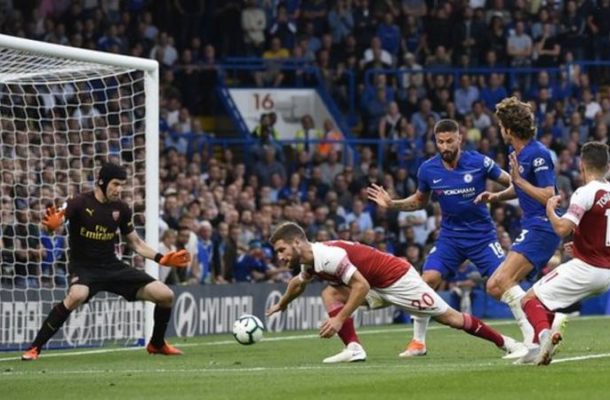 Alonso scored the winner having earlier assisted the opening goal, scored by Pedro

Marcos Alonso's late strike settled a chaotic classic in Chelsea's favour after Arsenal fought back from two goals down and threatened to earn a point at Stamford Bridge.
Maurizio Sarri's side built that advantage inside the first 20 minutes after Pedro turned in Alonso's cross and Alvaro Morata added another seconds after Arsenal's Pierre-Emerick Aubameyang blazed over from close range.

Henrikh Mkhitaryan wasted a similar opportunity before pulling one back with a low shot that Chelsea's new £71m keeper Kepa Arrizabalaga should have saved before Alex Iwobi put the Gunners on level terms.


This was a heavyweight Premier League clash for the managerial newcomers Maurizio Sarri and Unai Emery - and they were provided with plenty of food for thought after an engrossing 90 minutes.

Emery is perpetual motion in his technical area, pacing it constantly from almost the first minute, a blur of gesticulations and dramatic effect with cajoling and encouragement throughout.

The Spaniard is still trying to put his imprint on this Arsenal team after the end of Arsene Wenger's 22-year reign and he is very obviously a hands-on figure.

It is also clear from the manner in which Arsenal got back into the game - even though they ended defeated - that his new players are fighting for their manager.

Sarri, dressed casually in a t-shirt and tracksuit bottoms, was far less animated than Emery but was still keen to get his message across and it is already clear he is determined to repeat the brand of attacking play that made his reputation as he makes his mark at Stamford Bridge.

These two experienced managers will add plenty of character and colour to the Premier League's A-list cast of managers - and both will have much to keep them occupied.

Defensive chaos cause for concern


This was a chaotic classic of a Premier League game, especially in a first half that brought four goals and some early contenders for misses of the season from Arsenal.

What will have concerned Sarri, even after a win that makes it maximum points from two games, is the ease with which Arsenal were able to cut his defence apart on so many occasions in the first half.

Sarri loves his teams to be on the front foot but Arsenal could easily have scored five, perhaps six, goals in the first 45 minutes - happily for him he has quality in attack at his disposal that enabled Chelsea to come through this test.

As for Emery, his style of a high defensive line and playing out from the back is a work in progress but both Sokratis and Shkodran Mustafi are alarmingly short of pace for such an approach and this needs to be addressed.

It all made for gloriously entertaining fare - but with causes for concern for both Sarri and Emery.

What can Sarri and Emery take away?


Sarri can be a satisfied man with a second successive victory, one achieved when he is still easing Hazard back to full throttle via the substitutes' bench.

He will need to cure those defensive ills but Chelsea have class in other areas, with Jorginho a quality addition and Pedro and Morata chipping in with goals.

Emery looked devastated at the final whistle and, of course, no points from his first two (admittedly very tough) games is hardly a flying start.

And yet there were things to encourage him.

Teenager Matteo Guendouzi looks a real prospect and he will be delighted by his team's resolve after they went two goals behind to work their way back into the game.

This was never going to be a quick fix and the fixture list has been cruel - and on another day Mkhitaryan and Aubameyang will put those chances away.

Emery will hope to get off the mark at home to West Ham United, who have also started with successive defeats.

What the managers said

Chelsea manager Maurizio Sarri, speaking to BBC Sport: "In this period for us it's not easy to gain points. Three points is an important target for us. We did very well for 75 minutes but, inside that, 15 minutes were horrible.

"It was very, very difficult because we lost the distances between the players and we were unable to cover the lost balls and press like a team, so we were really in trouble. But I think the players were really very good because at 2-2 it was not easy with Arsenal.

"In the second half we did very well mentally also."

Arsenal manager Unai Emery, speaking to BBC Sport: "It is clear the result is not good for us but the process is continuing. Today, one thing in the first half is the reaction after 2-0, and also the efficiency. We had chances to more score in the first half.

"I think we need to control the second half like we want, but we didn't play like the first half and our chances were less.

"We need to continue working for what we want, our process. Today we had two midfielders - one 19 and one 21 years old. We need to give them the confidence to play but our way, our process, is to improve and give these chances to the young players. I think today will prepare us well for the next matches."


Chelsea are away to Newcastle next Sunday in a 16:00 BST kick-off, while Arsenal are at home to West Ham on Saturday at 15:00 BST.