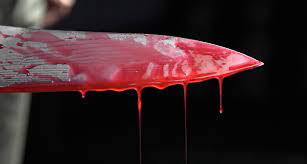 A 35-year-old man, Samuel Tuga, has reportedly been stabbed to death at Buduburam Big Apple in the Gomoa East District of the Central Region.

This was at a time a misunderstanding ensued between the deceased said to be a motor repairer and the suspect Kojo Manney.

An eyewitness said a fight broke between them during which Mr Manney grabbed an orange seller’s knife and stabbed Samuel.

He was, however, apprehended by irate residents after the heinous crime and handed over to the Buduburam District Police Command.