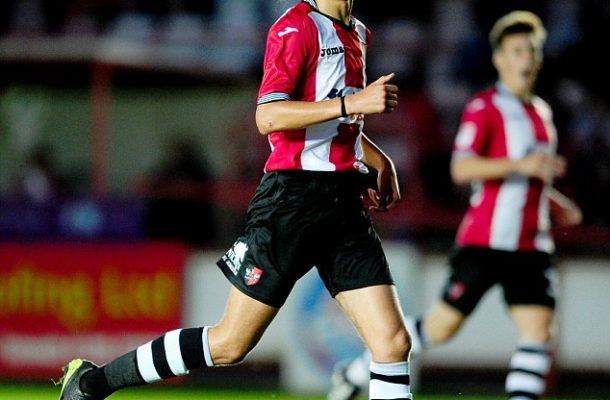 Ghana is cought in a tug-of-war with Wales and England over , Ethan Ampadu, who made history by playing in the League Cup at just 15 years of age on Tuesday night.

The race for the the Wales under-16 side, captain has gained traction as he is now among the moste sought-after player by every big cub in the Britain.

Described as a cross between Aaron Ramsey and Joe Allen, the Ghanaian born played a full 120 minutes for Exeter in their 1-0 cup upset over Championship Brentford and was named man of the match.

Ampadu has come through the Welsh system, playing for the under-14s, under-15s, under-16s and under-17s, but has also been invited by England to join their youth set-up.

Ampadu was invited to train with Gareth Bale and the rest of the senior squad ahead of Euro 2016. Welsh boss Chris Coleman has also made a point of taking the youngster into the Cardiff City Stadium dressing room ahead of games to give him a feel of what it is like to be a top Wales player.

It is part of what Welsh youth guru Chris Whitley, who has been involved in age-grade football for 40 years, describes as 'an advanced development package' for the best young talent.

"So many of these young players are dual qualified," explains Whitley, Head of the FAW's International Board. "It's one thing identifying the player, but what do we do to keep him? "We make sure we have the best programme, the best preparation, travel and hotels. We make them feel valued and wanted

Ampadu is being trailed by Manchester United, Liverpool, Chelsea, Arsenal and Manchester City and his prospects has

Born of a Ghanaian Father and a Welsh mother, he qualifies qualifies for Wales because it is the land of his mother's birth, but could also represent the Republic of Ghana and Ireland as well.

He doesn't score the goals Ramsey does, but has impressed so much that England are also in the hunt and trying to persuade him to play for the Three Lions However, Wales are hopeful that the systems they have in place these days and the fact the player has been with the senior squad will sway the day.

His father, Kwame Ampadu,former Swansea midfielder made 144 appearances for the Welsh club between 1994-98.

His exploit when he led the Welsh under-16 side to beat England to win the Victory Shield for the first time in 66 years go him highly rated that he was elevated into the under-17 side a year early.

Exeter manager Paul Tisdale beamed: "The remarkable thing is he is not necessarily a centre-back. He's one of those players that can play in four or five positions.

"Often these 15 or 16-year-old players who come through early tend to be, as a sweeping generalisation, a quick sparky winger where you're not risking too much by playing him.

"When it's a centre-back, you have to trust them, and the biggest compliment I could give him is that he plays like a 35-year old. Let's not forget, he's still at school and he's on school holiday."