At The Theatre Of Dreams : Dreams Fc Seek To Demolish The Miners 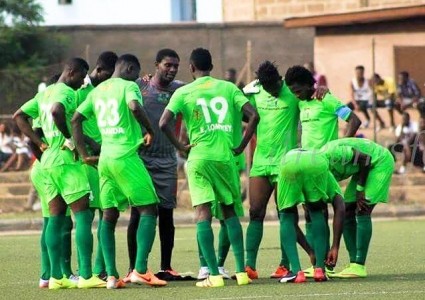 Dreams FC are prepared to do the double over Ashanti Gold SC by ending their seven-game unbeaten run.

The premiership debutants suffered a painful defeat against another Ashanti regional side Asante Kotoko last Sunday when they conceded a penalty in the last four minutes of the game.

Midfield enforcer Emmanuel Lomotey is expected to make return into the squad for the Miners' visit. The national U20 star couldn't make the trip to Kumasi last weekend.

Versatile defender Emmanuel Eli Keke has been ruled out of the epic clash on Saturday after failing to recover from a groin injury he suffered against Asante Kotoko.

They are poised to stretch it to eight with a revenge victory over Dreams FC on Saturday.

Midfield duo Joseph Ato Bissah and Daniel Addo are out of the crunchy encounter.

They have travelled outside the country.

Black Stars goalkeeper Fatau Dauda picked up a groin injury in the Adansi derby last Sunday which saw him being replaced by Robert Dabuo in the second half.

The experienced goalie has recovered and is expected to man the posts on Saturday if chosen by coach Bashiru Hayford.

*Ashanti Gold SC have lost only one of their last thirteen matches in the premiership.
They are unbeaten in their last seven.

*Dreams FC have lost only one of their eleven home fixtures in the premier league this season.
They are unbeaten in their last seven.

*Ashanti Gold SC have managed just a single victory in their last twenty two away games in the premier league.
(W1 D11 L10)

*Dreams FC are hosting Ashanti Gold SC at the Dawu park for the first time in the premiership history.

*Ashanti Gold SC succumbed 1-0 to Dreams FC when they met for the first ever time in the league in Obuasi.

*Dreams FC have managed to keep five clean sheets in their eleven home matches in the premiership.