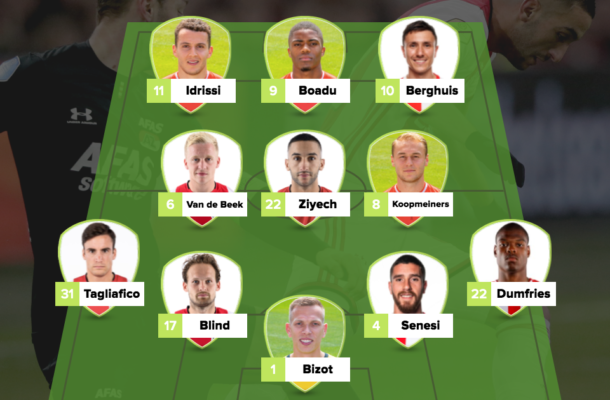 The polls see Boadu as the best striker in the Netherlands

Dutch striker of Ghanaian descent Mayron Badu has been named in Dutch League's team of the season in an opinion poll conducted by sportsnieuws.nl.

With 52 percent of the votes, the majority of you see Boadu as the best striker in the Netherlands, the report says.

In the likeliest event that the Eredivisie will not resume, the 19-year-old will remain the best attacker the 2019/20 Dutch League.

The league is on suspension due to the COVID-19 pandemic which has torn though Europe and other continents.

Among all the other experienced players in this team, Myron Boadu is by far the youngest player in this team with his 19 years of age. Despite that age, the Amsterdammer has already done a lot. A serious ankle and knee injury meant that Boadu had to play no less than 68 (!) Matches.

Boadu has been in blistering form all season with his 14 league goals helping the Cheeseheads to second place, same on points with Ajax at the top of the table.

He has six assist to his credit an regarded as the most improved and best player in the Eredivisie ahead of Ajax's Hakim Ziyech.

With 14 goals in 24 games, he only sees Steven Berghuis and Cyriel Dessers on the top scorers list of the Eredivisie.