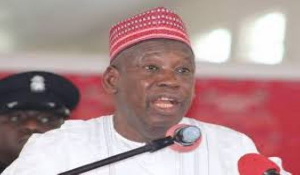 The Nigerian Union of Allied Health Professionals on Sunday called on the President, Major General Muhammadu Buhari (retd), to reverse his decision on the easing of COVID-19 lockdown, which takes effect today (Monday).

The NUAHP made the call in a statement signed by its National President, Dr. Obinna Ogbonna, and its General Secretary, Martin Egbanubi.

As health workers advised the President, members of the Presidential Task Force on COVID-19 he sent to Kano State expressed concern about the high rate of community transmission in the state.

The presidential team said 80 percent of every 100 samples taken from the state for testing always came out positive.

As of March, the state had no case of COVID-19, but on April 11, a former ambassador, who attended a Jumat service while awaiting his coronavirus test result, was diagnosed with the virus.

Buhari had, in his broadcast to the nation on April, 27, imposed a total lockdown on Kano State and dispatched a team of experts to the state the following day as part of efforts to stop the spread of the virus.

But in the national broadcast on April 27, he said there would be phased and gradual easing of the lockdown in the Federal Capital Territory, Ogun and Lagos state, which started on March 30.

He, however, imposed a dusk to dawn curfew on the country and banned inter-state movements.

The Head of the team sent to Kano State by the President, Dr Nasiru Gwarzo, said the state had a high rate of community transmission of COVID-19.

Gwarzo told the BBC Hausa Service in an interview that the high rate of transmission, as shown by increased testing, was evident when compared to the former situation in the state.

According to him, there is an urgent need for the people of Kano to take the deadly disease seriously as out of every 100 samples taken for testing, 80 per cent always came out positive.

He said, “This is a serious situation which needs collective effort to address as the case of pandemic has gone beyond people’s imagination as it has gone to community transmission.

“What we are afraid of in this pandemic is what is happening. The pandemic has left the first stage of entering the country. It has left the second stage and has entered the third stage of community spread. This is not news that will be palatable to the public but like a Hausa proverb says, ‘on the day you are to take a bath, you cannot hide your navel.’”

Most of the strange deaths in Kano caused by COVID-19, says Gwarzo

He said the team was worried about deaths, which had claimed many personalities in the state.

According to him, most of the recent mass deaths in the state were caused to COVID-19.

He said, “If you follow the debate (over the cause of the Kano mysterious deaths), while there is some truth in other causes, (complications from hypertension, meningitis, among others), coronavirus is the leading cause of these deaths in Kano.”

“On the coronavirus itself, when we conducted tests before, you saw four or five; now you can take 100 samples and 80 (percent) return positive,” he added.

But the NUAHP, which consists of clinical professionals in the health sector with the exception of physicians and nurses, in its statement, said its decision to call for the reversal of the President’s order was based on its observation in the last few days concerning the increase in the number of infected persons, number of deaths and testing capacity.

It said, “The union has studied carefully the declaration by President Buhari on the gradual easing of lockdown nationwide with effect from Monday, May 4, 2020 and hereby raises a serious concern based on reported cases of increase in coronavirus infection and spread across the country in the last few days.

“As a union with members as frontlines workers, we cannot but caution the federal and affected state governments to continue with the lockdown until adequate measures have been taken to contain it.

“We must not forget the fact that the deficit of health professionals, medical materials and facilities in our country would not be able to handle whatever upsurge that may arise due to the high incidences especially the community transmission that is being presently witnessed in some parts of the country.”

Meanwhile, Kano State, on Sunday, said it required no fewer than 5,000 bed spaces in isolation centres to accommodate the rising number of COVID-19 patients in the state in the next one month.

The Director of the Infection Control, Aminu Kano Teaching Hospital and Chairman of the Risk Communication Committee on COVID-19, Prof Isah Abubakar, disclosed this in an interview with The PUNCH in Kano on Sunday.

The Director-General of the NCDC, Chikwe Ihekweazu, had, at the PTF media briefing on Thursday, said Lagos State, with the highest cases of the virus, needed more bed spaces.

Ihekweazu, who stated that there were 3,500-bed spaces nationwide for COVID-19 patients, said Lagos was struggling to get bed spaces.

But on Friday, he said no state in the country had fully fulfilled the capacity required to address the outbreak of the virus.

Speaking on the state government’s efforts to combat COVID-19, Abubakar, in the interview with one of our correspondents, said, “In the next one month, Kano is targeting 5, 000 beds to be provided at isolation centres in view of the increasing number of COVID-19 cases in the state.”

He said there were three fully-equipped isolation centres with over 600-bed spaces in the state.

According to him, the isolation centres are Kwanar Dawaki, the Muhammadu Buhari Specialist Hospital and the Sani Abacha Centre.

He said the state government had also established six additional isolation centres which would commence operation to complement the existing ones.

“The isolation centre at the Kofar Mata Stadium, which has already been equipped with necessary facilities, will be ready for use by next week.”

In a related development, a traditional leader and Jarman Kano, Prof Isa Hashimi, on Sunday became the latest prominent person to die in the state, which has lost no fewer than 640 people in the last few weeks.

Hashimi died in the early hours of Sunday at the age of 86. A government official confirmed the death to one of our correspondents.

His demise was coming barely hours after the death of the Emir of Rano, Alhaji Abubakar Ila II, on Saturday.

Hashim, who was once a lecturer at the Bayero University, Kano, was a senior member of the Kano Emirate Council.

Also, a former member of the House of Representatives, Jakada Kiru, died on Sunday.

A family source, who confirmed the death to one of our correspondents, said Kiru died at the age of 62 and had been buried in accordance with Islamic rites in his hometown, Kiru.

A former Commissioner for Education, Mallam Haruna Shanono, died three days ago. Shanono was a commissioner during the Kabiru Gaya’s tenure as governor of the state in the Second Republic.

It was gathered that the ex-lawmaker and the former commissioner died of COVID-19 related complications.

In Zamfara State, the Emir of Kaura-Namoda, Alhaji Mohammed Asha, died in the early hours of Sunday.

The Publicity Secretary for the Control and Prevention of COVID-19 in the state, Alhaji Mustafa Kaura, told journalists that the Emir was brought to the isolation centre at the Yariman Bakura Specialist Hospital, Gusau, three days ago, when he developed symptoms of the disease.

Kaura stressed that his blood sample had been sent to Abuja for the test, adding that “the result is still being awaited”.

He said the remains of the Emir were in the hospital awaiting burial by officials of the NCDC.

YOU MAY ALSO LIKE: Kaduna records 50 COVID-19 through Kano Almajiris – El-Rufai

The state governor, Abdullahi Sule, confirmed this on Sunday while briefing journalists on COVID-19 cases in the state.

Sule, who said Adamu died before the result of his test came out, said the state the house of assembly complex would be shut.

According to him, no fewer than 23 members of the state House of Assembly have been quarantined as a result of Adamu’s death.

The governor stated, “The family members of the late lawmaker have also been quarantined, alongside members of the state assembly. All the kits ordered by the state government for protection against coronavirus have also arrived.”

Meanwhile, the Federal Medical Centre, Idi-Aba, Abeokuta, on Sunday confirmed that a pregnant woman died of COVID-19 in the centre on Friday.

The management also said it had shut down the Accident and Emergency Complex of the centre where the woman died.

The Head of the Public Relations Unit of the FMC, Abeokuta, Segun Orisajo, disclosed this in a statement on Sunday.

Fears have gripped workers of the hospital since Friday when the pregnant woman died in the facility.

Four health workers were said to have attended to the patient before she died.

There are concerns that the health workers that attended to the patient might have been exposed to the virus, hence, their samples were taken for tests and results are still being awaited.

Reacting to the development, Orisajo explained that the incident involved three persons which included two women.

He said, “Three suspected cases were being managed at the Accident and Emergency Complex of the Centre within last week.

The PRO further said the hospital management had released the corpse of the deceased to her husband.

According to Orisajo, her corpse was released to her husband after careful counselling and due adherence to the World Health Organisation’s guidelines on such matter.

On the second case, Orisajo explained that the patient was a young man who had been transferred to the state isolation centre.

He said “The second patient is a young man who has been transferred to an isolation centre in the state.

“He is clinically stable. Both patients were managed in the accident and emergency complex.”

While allaying fears , the hospital spokesperson said there was no cause for alarm over the state of health of workers who attended to the patients.

Also, the Lagos State Government on Sunday announced three COVID-19 related deaths. It said 22 patients were discharged from the isolation centres in the state.

The state Ministry of Health, via its twitter handle, @LSMOH, said the state had recorded 28 COVID-19 related deaths and discharged 247 patients who recovered from the infection.

In Bauchi, the Executive Chairman of the state Primary Health Care Development Agency, Dr. Rilwan Mohammed, told one of our correspondents in a telephone conversation that the state had tested over 348 Almajiris brought back to the state.

He said, “We have screened 348 of them. What we normally do is that as soon as they are brought into the state, we move them to the General Hassan, Katsina Unity College, Yelwa, here in Bauchi where they are being isolated. Then we’ll take their samples and send for testing before we will know their statuses.

“Today (Sunday), we have received additional 54 that have been brought back and we are still expecting about 300 others. As I speak with you now, the team has gone to take the samples of these 54 that have just been brought into the state.”

The state Commissioner for Health, Dr Aliyu Maigoro, in a text message sent to The PUNCH, said seven Almajiris, who tested positive, had been moved to the Abubakar Tafawa Balewa University Teaching Hospital, Bauchi.

The Nigerian Medical Association chairman in Gombe State, Dr Zawaya Kefas, told The PUNCH that all almajiris should be tested for COVID-19

Kefas said the way Almajiris got food on a regular basis explained the growing positive cases among them.