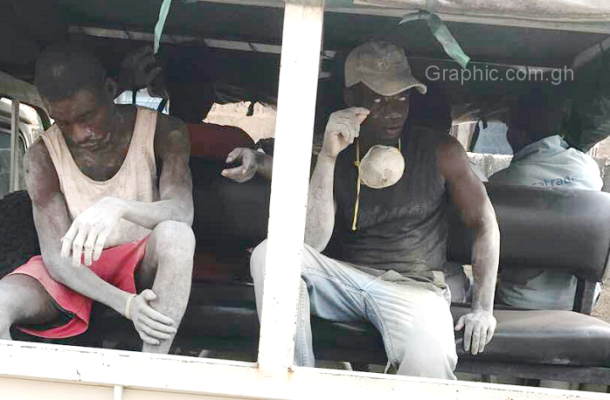 Nine people, including a female, have been busted by a combined team of National Security and the Preventive Unit of the Customs Division of the Ghana Revenue Authority (GRA) at Teshie in the Greater Accra Region for allegedly re-bagging Dangote Cement.

Members of the syndicate were arrested by the Preventive Unit of the Customs Division at their hideout in an uncompleted warehouse at Teshie while they were re-bagging the bulk cement.

The cement being re-bagged was supplied to them by a bulk cement tanker trailer, with registration number GM 7042-14 and belonging to Dangote Cement Ghana Limited, manufacturers of class Portland cement type one.

The vehicle, driven by one Offei, 50, has been impounded by Customs and sent to the National Security Head Office in Accra.

As of the time of their arrest, the syndicate had re-bagged 220 bags of the bulk cement into Dangote Cement bags, ready to be sold to people.

Although the company sells its product at GH¢28, the syndicate sells the re-bagged cement GH¢8 cheaper.

The Deputy Commissioner in charge of Preventive at Customs, Mr Seth Dwira, told the Daily Graphic that Customs, acting upon intelligence, stormed the premises where the syndicate was re-bagging the bulk cement.

He said the re-bagged cement weighed less and had reduced quantities, compared to the original bagged by the company.

Mr Dwira indicated that Customs officials had been aware of the practice for a long time but, on many occasions, members of the syndicate bolted before the Preventive Unit arrived at the warehouse.

According to him, the unit, therefore, put them under surveillance, leading eventually to their arrest.

All the suspects, he added, had been granted police enquiry bail.

Mr Dwira indicated that the Preventive Unit of Customs had intensified its surveillance on all custom-related activities, particularly how warehouses were used, in order to ensure that nobody engaged in any business that denied the state the needed taxes.

The Media Relations Manager of Dangote Cement, Mr Etornam Komla, confirmed the incident and said the company had ordered investigations into the issue.