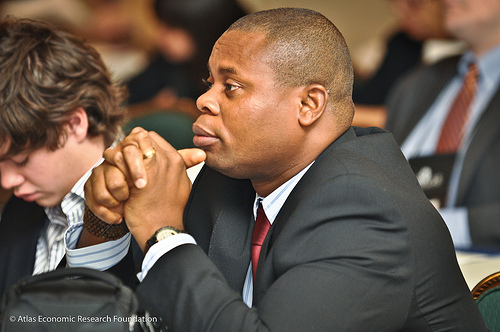 President of policy think tank, IMANI Africa, Franklin Cudjoe, has described the number of workers under the presidency of Nana Addo Dankwa Akufo-Addo, as a 'senseless' arrangement.

Speaking on Citi FM’s news analysis programme, The Big Issue, Franklin Cudjoe said the number is only a testament to what he calls the numerous unplanned policies of the government.

He said; “When Mahama was in office between 2012 and 2016, the budget that the office of the government machinery was receiving was actually high, but when Mahama was leaving office in 2016, he had spent almost a billion Ghana cedis and he overran that budget by GHc50million. In some years in 2012 and 2013, Mahama overran his budget by GHc200 million and GHc99 million.”

“In 2018, they’ve allocated GHc3 billion that is GHc2 billion more than Mahama had, to the office of government machinery. There is nothing sensible about this arrangement and it is only making Mahama look like a saint,” he added.

Franklin Cudjoe further stated that the vast number of workers under the presidency only institutionalizes wastage.

“Anytime we talk about the issue of waste and corruption, corruption is not just stealing money and putting your hands in the kitty, it’s also actually officialising waste. This is a clearest example of an officialized waste, and we need to speak up against these things.”

“I’ve heard some people in government saying that these are people who have been employed previously by civil service so they shouldn’t do anything. But the list we see, I know a lot of the people over there and it’s not as if they are communicating anything important anyway and it’s worrying. These are the hallmarks of having an unplanned policy guideline programmes. That is why when we were asking for quantification of political promises, because we knew that we will get to this stage.”