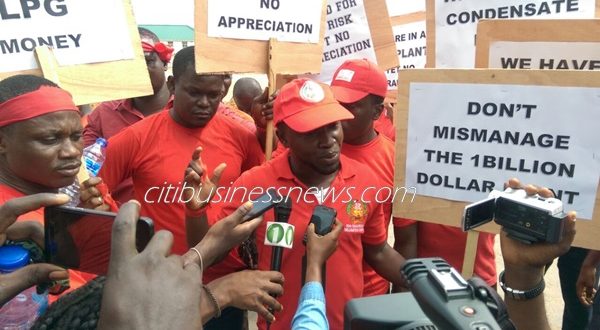 Workers at the Atuabo Gas Processing plant of the Ghana Gas Company Limited, protesting against their poor working conditions have vowed not to rescind their decision until their issues are addressed.

The workers who form the local union of the General Transport, Petroleum and Chemical Workers’ Union today (Friday), demonstrated against what they say is a failure by the management of Ghana National Gas company limited to provide them good working conditions despite the high risk nature of their job.

“We are demonstrating against the systems that we find ourselves in; issues bordering on learning and development, remuneration of the ordinary employee of Ghana Gas as well as things that we need to work with. Whenever the engineers are undertaking any particular exercise at the plant, you go there and the only language they communicate in is Chinese. So we ask ourselves, how can we learn from these guys if they are communicating only in Chinese?” Chairman of the workers’ union, Richard Alamu said.

Some of the demonstrating workers

Citi Business News however understands today’s demonstration was met with the presence of heavy security personnel who denied the aggrieved workers entry into the Atuabo gas processing facility.

Richard Alamu however says they will not be discouraged by the development.

He explained that the inability by the management to grant them their request is due to the lack of funds which is attributed to the debts owed Ghana Gas Company Limited by Volta River Authority (VRA).

“Our company keeps saying that it’s because of VRA’s indebtedness that is why they are not able to really do the sort of financial commitment that they ought to. We are not demanding much.

“What we are saying is that the systems here ought to work. Management has to come down; they should make sure that the priority of the ordinary employee of Ghana Gas is taken care of,” he stressed.

Meanwhile the Ghana National Gas Company Limited has described the demonstration by its workers as illegal.

Communications and Corporate Affairs Manager of the Company, Alfred Obgarmey tells Citi Business News the company has already engaged the mother union of the petroleum workers on the concerns of the workers.

“Unfortunately for them, we advised them against it and the move will be that they are exposing the mother union to ridicule in the presence of the ministerial meeting that happened,” Mr. Ogbarmey remarked.

He however explains that any decision on the fate of the demonstrating workers will have to be determined by the top management.

“I cannot say specifically what decision management will take on the agitating workers but whatever action will be decided by the CEO and the top management and I cannot even anticipate what they have in mind.”

“But I will expect that the management to take stringent decision because to allow this conduct to go unpunished, could be disastrous as well,” Alfred Ogbarmey added.