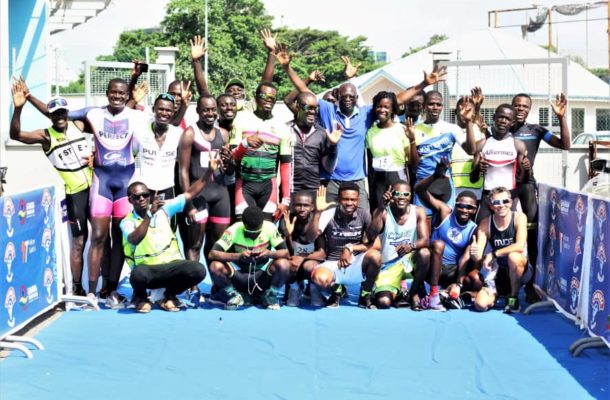 The Ghana Triathlon Association decided to hold a competition called " Duathlon Championship" which consists of two sporting disciplines ( Running and Cycling). As we all know Triathlon is three ( Swimming,Cycling and Running).

It was held at the Accra Sports Stadium with the support from the French Embassy and always ever ready to be there Cowbell from Promasidor Ghana. Some participants where in high spirits of winning the ultimate but tye ground and destiny will sure. Immediately they finished registeration then the action time started with the athletes engaging each other in Cycling and Running.

After the whole event came to a close a young man emerged as the winner and that name sounded very familiar with me, Abdul Rahman Abdul Samed ,the same athlete who had won the first ever Osagyefo Cycling Championship orgianised in August this year.

Abdul Rahman In an interview with Alliance Plus Media said, his main challenge was the running because he is already good in cycling.

Mercy Naa Pappoe was the only female participant and as a first timer too won the ladies champion and was very happy to complete the course but said she will train harder to be able to reach international stage.

The Hardworking , Tireless, All Smiling President Bawa Fuseini was all joy for everyone who helped with the organisation of the Duathlon Championship and thanked the French Embassy for their immerse contribution towards sports but the greatest also goes to Promasidor Ghana Limited producers of Cowbell for their continuous contribution to Ghana Triathlon Association.