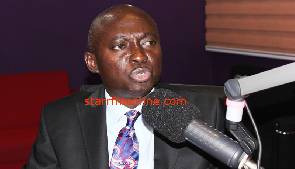 The decision of the Speaker of parliament to throw out a motion of inquiry filed by the Minority caucus concerning the gift of a Ford SUV to President Mahama is “very saddening”, MP for Abuakwa South, Samuel Atta Akyea has noted.

“The rule of natural justice was not observed because the Speaker of Parliament should have allowed the house to debate the issue and, at least, heard the minority articulate their position. But if he comes to the room with a prepared speech, where is natural justice?” he questioned when he spoke to journalists in parliament moments after the Minority has held a press conference to express their displeasure about the Speaker’s ruling on the matter.

In dismissing the motion, Mr Edward Doe Adjaho told the house that a search by the clerk of parliament indicated that the Commission on Human Rights and Administrative Justice (CHRAJ) had received three separate petitions concerning the same issue involving the Ford gift and was looking into the matter.

The president’s acceptance of the SUV from Burkinabe contractor Djibril Kanazoe, who was in turn awarded numerous contracts by the government of Ghana, was the issue of contention, which the minority felt was wrong on the president’s part.

Mr Adjaho, however, told the house that: “After a careful study of the correspondence from CHRAJ, I have come to the conclusion that the matter is not different in material, in particular from the matter under investigation by CHRAJ.”

He indicated that Article 287 of the constitution of Ghana gave CHRAJ the power to investigate matters relating to the breach of conduct involving public officers, for which reason it would not be proper for parliament to take up an issue already being investigated by another body mandated by the constitution to perform such duties.

“It is my view, therefore, that CHRAJ is the institution with exclusive constitutional authority to deal with all relevant matters relating to the breach of conduct of public officers including the matter involving the Ford Expedition vehicle,” he explained.

But Mr Akyea said the Speaker of parliament should have “afforded the minority the opportunity to state their views”.