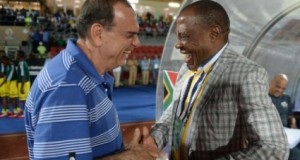 Mashaba, who future has come under scrutiny after failing to qualify his country to the continental mundial, believes the West Africans have enough quality to clinch the ultimate diadem.

The Black Stars will be chasing their fifth African crown in Gabon after losing out to Ivory Coast last year.

Mashaba said: “The Black Stars can pull a surprise to win the 2017 AFCON but they need to work hard,” he told Starr FM.

“It is going to be a difficult tournament because there are good team making it as well but looking at the pedigree of the Black Stars and how they performed in the last tournament I think they can win."

Ghana will play as guest of Uganda in a 2018 World Cup qualifier on October 7 before playing the Bafana Bafana in a high profile international friendly four days later in Durban.