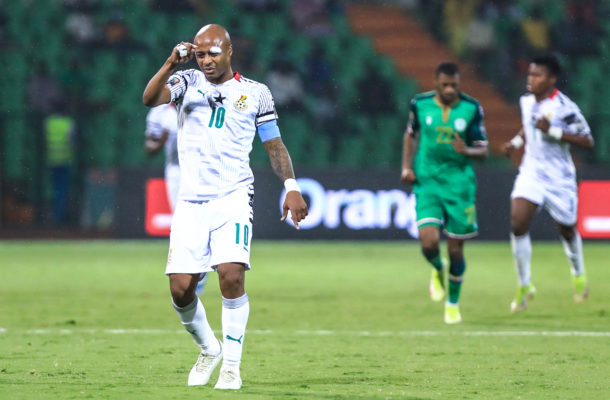 The Black set an unwanted recorded as Ghana failed to win a single game in a group made up of Comoros, Gabon and Morocco in the 2021 African Cup of Nations.

Comoros defeated Ghana 3-2 in a game, the Black Stars needed a win to progress to the next stage of the competition.

The islanders took the lead as early as the 4th minute after a break by  Ben Nabouhane after Daniel Amartey was easily turned before Andy Yiadom wrong footed goalkeeper Joojo Wollacot as the minnows made it 1-0.

Things were made harder as in the 25 minute, captain Andre Ayew was shown a harsh red card by the Malian referee after sliding into a rebound.

Goalkeeper Salim Ben Boina spilled a shot by Kamaldeen Sulemana and the Ghana captain kicked the ball but his momentum took him into the arms of the goalkeeper.

Whiles the goalie was receiving treatment the VAR officials advised the referee to have a look at the monitor and after a few images he showed the Ghana captain a red card.

Shots from Abdul Fatawu Issahaku and a close free kick from Thomas Partey only gave a 10 man Ghana side hope as Comoros went into the break with a 1-0 lead.

But on the 61st minute the Comoros broke and scored with a fine finish from Ahmed Mogni after he twisted and turned on the edge of the box before firing low with his left foot to make it 2-0.

The St Pauli midfielder showed his set pieces prowess as he nearly scored from a corner kick and a free kick .

In the 77th minute, Ghana equalized as Alexander Djiku slotted home from a Daniel Kyereh corner after a flick on by Thomas Partey.

Ghana  went for broke as Samuel Owusu and Joseph Paintsil were introduced but the Comoros took the lead late on as Ahmed Mogni scored the winner in the 85th minute after connecting to a cross from the right flank to stun Ghana.

The last time Ghana went out at the group stage was in 2006.