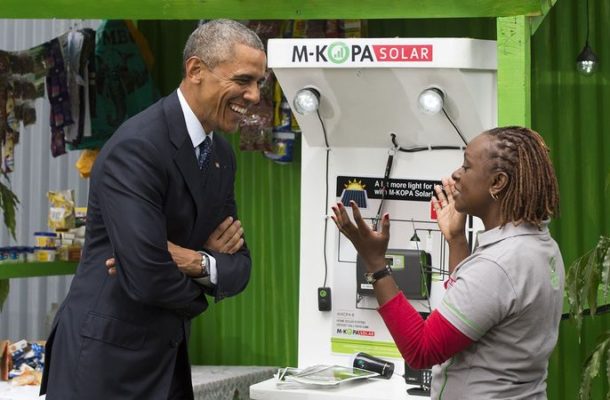 President Barack Obama’s signature initiative for Africa -- a $9.7 billion plan to double electricity access in the world’s poorest continent -- has fallen well short of its goals, so far producing less than 5 percent of the new power generation it promised.

Obama announced Power Africa three years ago with an ambitious goal: to add 10,000 megawatts of power and supply electricity to 20 million households within five years. As he prepares to address the U.S.-Africa Business Forum in New York on Wednesday, the project has yielded less than 400 megawatts of new power after running into political and economic difficulties.

“If you look today at the number of megawatts that are actually on the grid directly related to the Power Africa initiative, it is very little,” John Rice, vice chairman of General Electric Co., said in May at the World Economic Forum in Kigali, Rwanda.
Power Africa, he said, “was a well-intentioned effort, with a lot of smart people, a lot of willing participants, financial institutions and yet, for some reason, it couldn’t come together.”

The program’s shortfalls mean that when Obama leaves office, the nation’s first black president and the son of a Kenyan farmer will not be able to claim a legacy-defining endeavor in Africa. By comparison, President George W. Bush’s signature initiative in Africa -- the President’s Emergency Plan for AIDS Relief, or PEPFAR -- provided drugs to fight HIV to more than 2 million people by the time he left office.

“You can’t just wave a magic wand and have all the infrastructure appear -- it takes time to build things,’’ he said. “A huge project doesn’t get built overnight. Not in the United States, not in Europe, not in China, not anywhere.’’

Herscowitz said Power Africa is backing projects across the continent, showing that the private sector is responding to U.S. efforts. A burgeoning market for solar panels is cropping up in places like Rwanda and Sierra Leone, and companies have committed more than $40 billion to dozens of Power Africa projects, he said. USAID estimates the initiative will ultimately provide electricity to 60 million households in more than 20 countries.

But many of the successful projects claimed by Power Africa were underway long before the initiative began, and much of the progress touted on paper has yet to materialize in actual electricity.


That’s evident on a visit to the main electronics market in Lagos, Nigeria, where shouting street vendors compete with hundreds of roaring generators that spring to life daily during power outages that last hours.

Even in the nation boasting Africa’s most potent economy, electricity is fleeting, and far too sporadic to keep this sprawling market reliably up and running.

“There was power supply this morning, but hardly did it last for one hour before it went off,’’ said Olajide Opemipo, a logistics manager who works in the market.

Sub-Saharan Africa has the world’s largest concentration of people without power. More than 620 million people in the fast-growing region lack a reliable supply of electricity, according to the International Energy Agency.

Power Africa enjoys some congressional support, suggesting it could survive Obama’s presidency. Representative Ed Royce, the Republican chairman of the House Foreign Affairs Committee, said the aim is that the private sector will continue to invest after Obama leaves office. He sponsored legislation, signed by Obama in February, that encourages future administrations to continue investing in Africa’s power sector.

“All of us understand that dealing in Africa in terms of development work is a long process,’’ he said. “You’ve got 600 million people in the dark in Africa without electricity --so it’s going to take time.’’


Obama pledged to provide “light where currently there is darkness’’ and double access to power across sub-Saharan Africa when he introduced Power Africa in 2013.

The initial five-year timeline for the program was later increased to 15 years, and the goal for increasing electricity access expanded to 60 million households by 2030, up from 20 million. The initial $7 billion commitment has increased to almost $10 billion.

“An undertaking of this magnitude will not be quick,’’ he said last year in Addis Ababa. “It will take many years.’’

Power Africa officials say they are on track to meet their target of adding 30,000 megawatts of power by 2030. The initiative has closed deals to add 4,600 megawatts to the grid, though plants producing less than 400 megawatts have been built so far.

In Nigeria, a U.S.-backed effort to privatize power plants would add about 2,500 megawatts to the grid. But the expected gains haven’t materialized and the country’s power generation has fallen to a decade low of about 3,000 megawatts this year.

“The situation is not getting better and we are not seeing results,” Opemipo said when asked about Power Africa. “If I were to rate them, I would give them zero because I don’t know when the initiative started and what they have contributed so far.”


Policy decisions and political dysfunction on both sides of the Atlantic Ocean have hampered the effort.

In the U.S., congressional gridlock over the Export-Import Bank has handicapped progress. The bank, which lost its charter for several months last year, was slated to provide $5 billion in financing out of the initial $7 billion U.S. commitment.

It has only provided $131.5 million so far, and hasn’t approved any additional financing since July 1, 2015. An aide at the bank said Senate Republicans’ refusal to fill vacancies on its board has left financing for several Power Africa projects stuck in limbo. Without a quorum, the bank cannot approve deals worth more than $10 million.

In Nigeria, a change in political leadership, currency controls and an economic recession sparked by falling oil prices have spooked investors.


Transnational Corp. of Nigeria Plc, an affiliate of one of Power Africa’s largest partners, last month suspended plans to build a $1 billion power plant, citing a surge in militant attacks on oil pipelines. Another project, the Azura-Edo Independent Power Plant, was delayed for months due to regulatory obstacles. The 450-megawatt plant is now moving forward, in part due to legal assistance from U.S. advisers, Herscowitz said.

Power Africa’s delivery of results in Nigeria and elsewhere could determine whether the next U.S. president continues to invest in the continent’s power sector. Obama hasn’t devoted much of his public time to Power Africa, and the project lacks a high-level champion in the White House, said Todd Moss, a senior fellow at the Center for Global Development, a Washington research group.

“I worry that the sustainability of the initiative is at risk when a new administration comes in and they have their own priorities,” said Moss, a former assistant secretary of state in the Bureau of African Affairs.

Recognizing the challenges and delays that come with constructing full-fledged power plants in the continent Power Africa is shifting its focus to faster, off-the-grid energy projects like solar panels, Herscowitz said.

Solar companies in Tanzania, Kenya and Rwanda serving thousands of customers have been funded by the program, he said.

“It’s challenging,’’ he said. “If it weren’t challenging, you would not need Power Africa.”