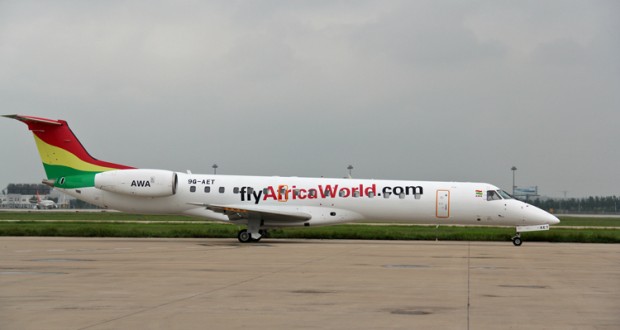 Africa World Airlines (AWA) has been adjudged the ‘Domestic Airline of the Year 2015’ at the maiden National Aviation Awards Ceremony held in Movenpick Ambassador Hotel in Accra on Friday 29th July 2016.

This is not the first time the airline is picking such an award,  AWA won The Domestic Airline of the Year 2014 at the National Tourism Awards last year making it 2 times in a row.

The National Aviation Awards recognizes distinctive achievements exhibited in every classification of the aviation industry.

It operates over twenty-two (22) flights daily to three (3) major cities in Ghana and regionally to Lagos-Nigeria.

These flight times as attested by AWA loyal passengers give them the needed opportunity to connect from other regional cities to board their international airlines without any struggle.

Africa World Airlines, was also awarded the “Best Airline in Health, Safety Environmental and Quality” at the National Aviation Awards.

The airline is currently the only Ghanaian airline with regional operations to Lagos, Nigeria.

The airline expressed gratitude to all passengers and stakeholders for their support, trust and loyalty to the AWA brand and assured them of the best service at all times.