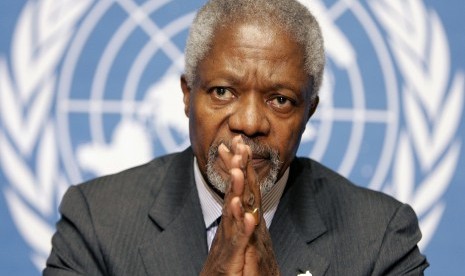 The 80 year old died Saturday in a hospital in Bern, Switzerland, after a short illness.

Annan served two terms as UN chief from 1997 to 2006, and was awarded a Nobel Peace Prize for his humanitarian work.

He later served as the UN special envoy for Syria, leading efforts to find a solution to the conflict.

While Eto'o called Annan as a figure who consistently spread goodness throughout life. Eto'o considered there were many things that could be copied from Annan.

By looking at what Annan has done, said Eto'o, the dream of everyone including children from third countries can provide an important role for the world community.

Annan in the eyes of the former Barcelona and Inter Milan player has done a lot of mediation for world peace.

"He is a very tolerant person. Tolerance makes him able to provide real good. His career is extraordinary for world peace," wrote Eto'o.

Drogba uploaded a photo he had with Annan in the past. That is a photo when he gave Jersey Ivory Coast on behalf of Drogba which was filled with the signatures of world footballers.

Drogba said Annan was a person of integrity because he had extensive knowledge. In accordance with the quotation of the aphorisms made by Annan.

"Knowledge is the power of liberating information, education is the premise of progress, in every society and every family," Drogba wrote, quoting Annan's words.