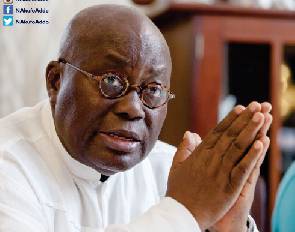 The Africa Watch Magazine, one of the most widely read on the continent has hit back at the NPP vowing to publish more revelations about Nana Akufo-Addo’s health and clandestine if the insults and lies continue.

The latest publication also makes reference to Edward ‘Bumpty’ Akufo-Addo, the NPP Presidential candidate’s brother who is seriously ill. Bumpty, a leading member of NPP financiers’ status, is badly affecting the party which is currently broke and still facing difficulties in raising cash for campaign because of donor fatigue deepened by cracks within the party.

Nana Akufo-Addo reportedly rewarded then deputy Governor of the Bank of Ghana, Dr Mahamadu Bawumia with the Vice Presidential slot for awarding the contract for printing of new currencies during the controversial redenomination exercise in 2007.

In a sharp response to attacks led by Freddie Blay’s newspaper, Daily Guide, Steve Mallory wrote; “Africawatch pride ourselves on being one of the most uncompromising, unbiased and truthful panAfrican magazines, and it was in that spirit that we covered in our August issue the health status of Nana Addo Dankwa Akufo-Addo….. We felt it was a story of vital national and international interest, with ramifications for Ghanaians in the upcoming election as regarding Akufo-Addo’s personal health and ability to withstand the rigors of the Presidency“.

The magazine exposes lies by a local Ghanaian doctor, Prof. Adu Gyamfi, who in a desperate attempt to water down the concerns about Nana Addo’s kidney and cancer disease told an Accra based radio station, JOY FM that the 72-year old Nana Addo’s Prostate-Specific Antigen (PSA) was not the extremely high 89.9 which we reported, but was only 0.03.

“This response from someone who has been treating a 72-year-old man for the past two years is striking. If he had done so, he could have easily given at least a yes or no response to the simple question of whether Akufo-Addo has ever been to the Wellington Hospital. This alone calls into serious doubt his assertion of a current PSA count of 0.03, or anything else he may have to say regarding the candidate’s state of health.” ..the publication emphasized.

The magazine also described as shocking and very disturbing, Akufo-Addo’s one clear response to all the issues at a rally in the Northern Region: “Now, they say I have cancer, it will not work.”

This, Steve Mallory finds very intriguing because Nana neither confirms nor denies the truth of the medical facts as reported by them.

Steve Mallory who as a personal friend of Nana Addo, was actively involved in fund raising activities for the NPP candidate is daring him to challenge me.

Africa Watch magazine further asserted, “I quit active politics in 2009 to return to journalism. As a journalist I would remain neutral and the magazine I edit would also remain neutral in Ghanaian politics. But as a friend, I have supported Akufo-Addo in the past. For those who do not know and are saying all sorts of things, I have given Akufo-Addo money in the past to support his campaigns, but he has never, ever given me one cent or one pesewa for my personal use, contrary to what his men are alleging. I dare Akufo-Addo to prove me wrong. My only concern was how Akufo-Addo’s campaign funds were poorly handled and misused. I am therefore not surprised that people are not too keen this time around to open their wallets in support of the NPP 2016 campaign”

Executive Editor Steve Mallory who stands by his publications says he is ready at any time to produce evidence in support of these assertions, including those related to the recent story on the health status of AkufoAddo.

“Nana Akufo-Addo (left) and his wife Rebecca (right) arrive at London’s Heathrow Airport in the early morning of September 9. As before, while visiting there he did other public activities to mask the real reason for yet another trip to the UK for medical treatment for his prostate cancer.”””

According to Mallory, barely two weeks after series of attacks on the magazine for revealing Nana Addo’s, prostate cancer, he sneaked out of the country on a British Airways flight to London for a routine medical treatment, using the recent public lecture on the economy by Dr Mahamadu Bawumia as a decoy.

Because of its earlier story, no announcement was made about Akufo-Addo’s sudden departure to London.

“In fact, he used a lecture in Accra on Ghana’s economy by his running mate, Dr. Mahamudu Bawumia, as a cover to slip out to London. Akufo-Addo showed up at Bawumia’s lecture all right, to keep up appearances in fact, but after the event, when everybody was digesting what the former deputy governor of Ghana’s Central Bank had said in his lecture, the presidential candidate took advantage of the din after the lecture to make good his escape to London for medical treatment.”

The NPP according to the magazine is in a serious state of dilemma.

“Now it appears Akufo-Addo has hit a snag that poses a threat to the NPP campaign. Three critical factors have come into play: The first is the fact that Akufo-Addo’s ill health is taking a serious toll on him. Second, his brother’s deteriorating health has become a major distraction for him as well. Third, the Akufo-Addo family is financially weak and the NPP is almost broke.”

The Africa Watch Magazine which has laced its boots for further NPP attacks mocks Nana Addo for failing to manage the NPP leaving it in a state of quandary, with very influential leaders deserting him or sitting on the fence while the NPP awaits a shocking defeat in the upcoming elections.