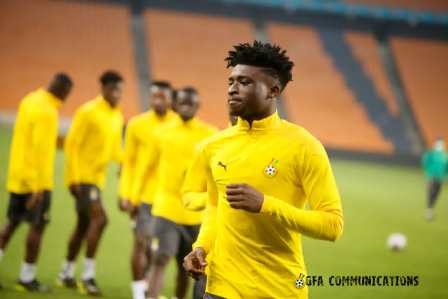 Head coach of Ajax, Erik Ten Haag has put in doubt any hopes of midfielder Kudus Mohammed making an appearance for Ghana at the African Cup of Nations.

Kudus Mohammed has been named in Ghana's squad for the African Cup of Nations tournament which is ongoing in Cameroon but is not yet in camp due to his fitness.

The player who was injured but has now returned to fitness has been captured in photos and videos training with his Ajax teammates in a winter training camp in Portugal.

The player sustained an injury during Ghana's  1-0 win over South Africa in the 2022 World Cup qualifiers at the Cape Coast Stadium.

The creative midfielder got injured when Ghana faced South Africa in the last match of the 2022 World Cup qualifiers.

In the 10th minute, the Ajax midfielder signaled to the bench that he needed attention after an off the ball incident resulted in his injury.

After persistent treatment he was taken off in the 12th minute with Daniel Kofi Kyereh on as his replacement.

Since then he has not played for Ajax but Ghana nonetheless named him in the squad for the tournament and the Serbian coach says the player will join the team but unsure when that will be.

Ten Hag explained that Kudus was not suitable, adding that it would be strange if Kudus joins Black Stars in Cameroon.

“[Not including him in the Ajax squad against Utrecht] already proves what I’ve said all along. He is not [match] fit and it would be strange if he would join the [AFCON],” the Dutch trainer said.

Ghana have insisted that the creative midfielder will join the team as the tournament goes on but it appears that will not happen.