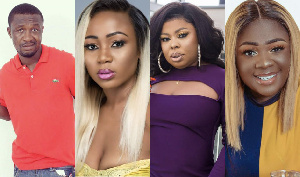 Actress, Rosemond Brown, popularly known as Akuapem Poloo has pointed fingers at Afia Schwarzenegger, Tracey Boakye, and Archipalago as people behind the viral spread of her naked bedroom video circulating on social media.

According to Poloo, the video was recorded by her friend last year when they were together in her old apartment and after a fallout, the said lady out of malice decided to leak the video to Afia Schwarzenegger who is no longer on good terms with her just because of her association with Mzbel and due to that, the video has since gone viral after Afia Schwar a few days back said on her Instagram page she has in her possession a naked video of someone.

The actress said the trending video has nothing to do with any sexual activity but rather, she was in the comfort of her room making a call whiles lying on her bed, unknown to her, her friend was taking a video of her nakedness just to disgrace her after falling out with her.

Watch and listen to full audio below: