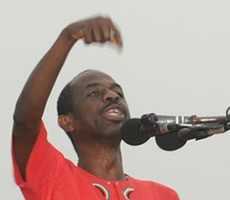 General Secretary of the opposition National Democratic Congress (NDC), Johnson Asiedu Nketia, is accusing the current administration of having sold the rights of Ghanaians to the United States following the ratification of the military agreement between the two countries which seeks to allow the latter to bring its soldiers into the country for training and deployment purposes.

According to him, the Ghana- US military agreement allows third-party rights of Ghanaians to be abused without any court action in Ghana.

Speaking on Okay FM’s Ade Akye Abia Morning Show, General Mosquito described the agreement as “deceit” of the Ghanaian public as Akufo Addo’s government is not giving Ghanaians the detailed agreement it signed with the US Military.

“The deal Akufo-Addo signed has sold out our third-party rights to the American soldiers and so if the property of any Ghanaian is being destroyed by these diplomats, we cannot take them to court, except on American soil....the usual norm has been that we can take civil or criminal action here whenever we feel cheated or they destroy our properties irrespective of their diplomatic immunity, but this new agreement has abrogated our third-party rights as citizens”, he revealed.

He reiterated that it is unheard of to see a sovereign country selling its third-party rights in such a military deal except Ghana; making it impossible for any individual to take any legal action against American soldiers whenever their properties are destroyed by these soldiers in the course of their duties.

The NDC Chief Scribe emphatically stated Akufo-Addo’s military pact is the first of its kind in the country, and vow that the opposition party will continue to pile pressure on the governing party through demonstrations over the controversial defence cooperation agreement.