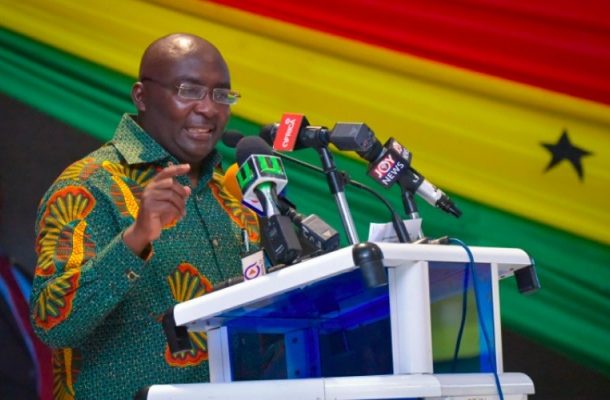 Vice-President Dr Mahamudu Bawumia has praised his boss, President Nana Addo Dankwa Akufo-Addo describing him as "promise-keeping President.”The Vice President who was speaking at the official launch of the restoration of Teacher Trainee Allowances in Accra on Friday March 23, 2018, Vice said the Akufo-Addo led government has managed to implement policies and programmes they promised Ghanaians in the run up to the 2016 general elections.

Futher heaping praise on his boss, Dr. Bawumia indicated that President Akufo-Addo, Ghanaians has proved to be a leader whose word is his bond.

“In Nana Akufo-Addo, we have a President who is determined to keep to his word, no matter the challenges. If he makes a promise, then rest assured it will be kept. This is a promise-keeping President and government.”Enumerating the many achievements chalked in the young life of the government so far, Vice President Bawumia stated, “We have had one year and three months of fulfilled promises.”“We promised to restore Teacher and Nursing Training Allowances. We have done it. We promised to reduce electricity tariffs, and we have done it. In the face of all the economic challenges, we still went ahead and introduced free senior high school education. In 2017, for the first time since 2006, we met and even exceeded our fiscal deficit target. No government has done it since 2006.“We promised to vigorously fight the canker of corruption with the appointment of a Special Prosecutor,” Dr Bawumia continued. “The President has gone ahead to appoint someone, not even from his party, but the opposition party. We mean business. We are confident that Mr Martin Amidu will deliver.“Another plank of the corruption fight is the passage of the Right to Information Bill, which has been on the drawing board for the past 18 years. Just today, it has been laid before parliament and has gone through the First Reading.“For our farmers, especially those in three northern regions, we promised to provide dams to facilitate year round farming with the programme of One Village One Dam. Last week when I said we would do 570 dams, our opponents cried foul, because we had stated only hundred earlier. In a few weeks work on the dams will begin. If God gives us the strength and the resources, we will do even more than the 570.”Reiterating Government’s commitment to ensuring quality education, Vice-President Bawumia said a significant portion of the nation’s resources would continue to be invested in the education sector, especially in training and infrastructure, as well as the welfare of teachers.“The restoration of the teacher trainee allowance is the first step on the road to ensuring that the teaching profession enjoys the exulted status it enjoyed in times past. With your help we shall make this happen,” he told the teacher trainees and their Principals gathered at the Accra College of Education, the venue for the launch.The Vice President further lauded the students for choosing the teaching profession, urging them to give their all to serve mother Ghana and transform lives.The leadership of the Teacher Trainees Association of Ghana (TTAG) later honoured the President of the Republic, H.E. Nana Addo Dankwa Akufo-Addo, with a specially designed plaque, for fulfilling his promise to restore their allowances if elected into office.The allowance had been cancelled by the previous administration, citing challenges with the economy.