Akufo-Addo has a lot to learn about patriotism - NDC 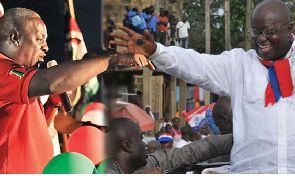 The campaign team of the National Democratic Congress has laughed off Nana Addo Dankwa Akufo-Addo’s statement that President John Mahama cannot teach him any lesson in patriotism.

The New Patriotic Party presidential candidate, Nana Akufo-Addo at the launch of the party’s 2016 manifesto Sunday said “Let me state clearly and without any equivocation that John Dramani Mahama cannot teach me any lessons in patriotism” His comments came on the back of a statement by President Mahama, which suggested his critics who do not see anything good under his leadership are not patriotic.

But Deputy Communications Director of the NDC campaign team, Felix Kwakye Ofosu, said Nana Akufo-Addo’s character and utterances rather suggest he has a lot to learn from President Mahama on patriotism.

He said Nana Akufo-Addo cannot boast of patriotism when he has not shown enough commitment over the period.

“The truth of the matter is that Nana Addo has a lot to learn from president Mahama as far as patriotism is concerned, his conduct over the period shows the attitude of someone who is not interested in exhibiting patriotism or even encouraging the people of his party to be patriotic” Mr Ofosu said on the sidelines of Setting the Records Straight.

He added: “This is a man who stood on a public platform and urged the people of his party to engage in violent activities so that the NPP will win election in 2012…” He argued that it is therefore not out of place if president Mahama calls on him to be patriotic.

“I think that it is lesson that he [Akufo-Addo] should learn and take in good faith, and refined his ways so that his conduct going forward will reflect somebody who is patriotic” Mr Kwakye Ofosu said.