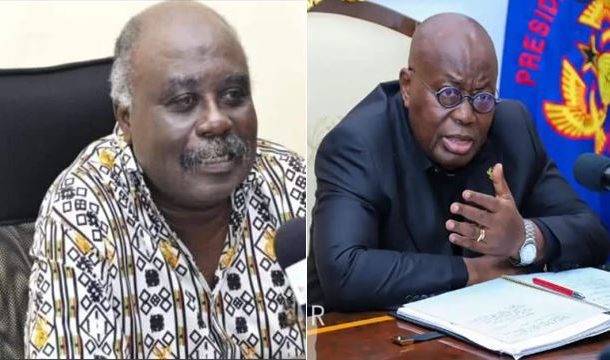 Leading Member of the ruling New Patriotic Party, Dr Charles Wereko Brobbey, has alleged that he nearly had his eyes pierced by President Nana Addo Dankwa Akufo-Addo at a funeral.

According to the statesman, the president, who he refers to as a brother, took offence at the criticism of his administration and sought to attack him when they both met at a funeral.

Speaking on Asempa FM’s Ekosii Sen on Tuesday, July 5, 2022, Mr Wereko Brobbey said he enjoyed a good relationship with the president in the early days of his administration.

He noted that President Akufo-Addo later stopped heeding to suggestions and advice he used to send him in a weekly memo.

Asked what the current status of his relationship with the president is, the leading NPP member spoke of a rather frosty one in which the president at a funeral attempted to assault him while accusing him of peddling falsehoods.

“He met me at a funeral, and he nearly pierced my eye with his finger... It was in anger. Because if you remember, I granted an interview to Joy. It was conducted by Evans Mensah. It was later, after the interview, that he met me. If I had not pulled my head back, he would have pierced my eyes with his finger.

"If you like, you can go and ask him. He said I was peddling falsehood,” he claimed.

Dr Wereko Brobbey, however, maintained that he only spoke his mind and never peddled falsehoods about the president.

He named the Minister of Agriculture, Dr Akoto Afriyie, and the Chief of Staff, Akosua Frema Osei-Opare, as his witnesses to the incident when the president attempted to assault him.