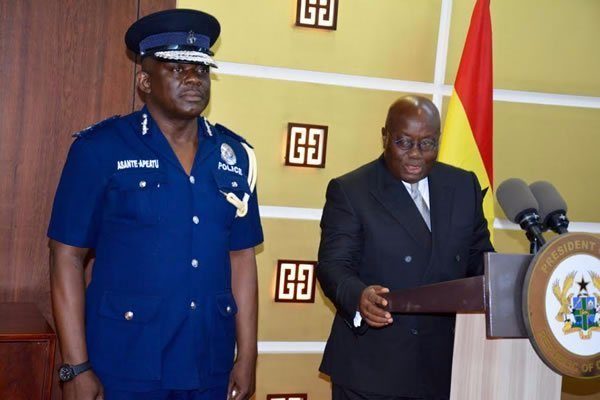 Mr Asante-Apeatu is due to begin his retirement from August 14 having served as the IGP for two-and-a half years.

His Deputy, COP James Oppong-Boanuh is to serve in an acting capacity until a substantive IGP is appointed.

A statement signed by Director of Communication at the presidency, Eugene Arhin said, “The President thanked him [Asante Apeatu] for his many years of service to the country, and wished him well in his retirement,”.

Mr Asante-Apeatu was the Director-General in charge of Research and Planning before he was appointed IGP in January 2017 following the retirement of Mr John Kudalor.

On August 15, 2015, he had his contract was extended for two more years based on the recommendation of the Police Council.

His tenure has been characterized with criticisms over the unresolved Takoradi girls kidnapping case, the indictment on the security services following the Ayawaso West Wuogon by-election and high-profile cases of police brutality.

The most recent controversy has seen him and the CID boss, Maame Tiwaa Addo-Danquah facing contempt charges over their refusal to comply with a bail order for Gregory Afoko, a suspect in the 2015 murder of the Upper East Region New Patriotic Party chairman.