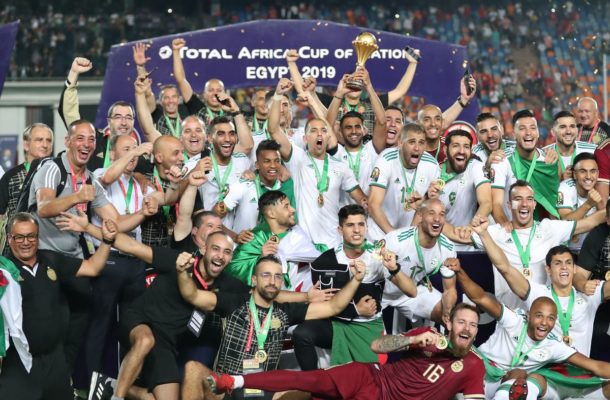 Baghdad Bounedjah's second minute deflected strike was enough to hand the 2019 African Cup of Nations trophy to Algeria their second after 29 years of waiting.

Bounedjah's wayward strike took a huge deflection of Salif Sane and looped over the head of goalkeeper Gomis.

It was a scrappy game afterwards with a lot of tactical fouls and few yellow cards to match but the goal suited the tactical game plan of the Fennecs as they sat deep, soaked the pressure and tried hitting their opponents on the break to littke success.

How Senegal would have done with a peak form Demba Ba, Moussa Sow, Papiss Demba Cisse or the good old EL Hadji Diuof as the Teranga lions had the bulk of possession but no one to finish it off.

The woeful Mbaye Niang was pocketed by centre back pair Aissa Mandi and Benlamri for most part of the game.

Niang was at the centre of two of their best chances as he flashed a fierce drive over the bar just before the break, and rounded keeper Rais M'bolhi early in the second half only to shoot wide from a tight angle.

Senegal thought they had been awarded a penalty after Cameroonian referee Alioum Alioum had adjudged the ball to have struck the arm of Adlene Guediora in the Algerian box but after massive protestation from the Algerian players and bench , he consulted the VAR and allowed play to continue despite the ball hitting the arm of Guediora.