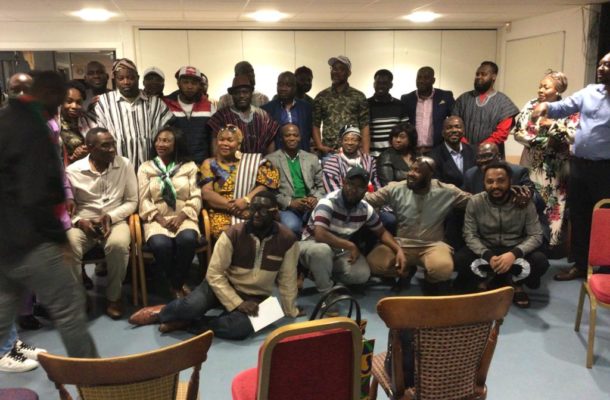 Former General Secretary of the National Democratic Congress Alhaji Hudu Yahaya has gingered the Birmingham branch of the party ahead of the 2024 election.

The NDC Birmingham Branch welcomed Ghanaians living in and around the City of Birmingham and in the UK to their annual community outreach program.

Alhaji Hudu Yahaya, an elder of party and former General Secretary of National Democratic Congress NDC, called in to encourage membership to remain steadfast and to remain law abiding citizens in the UK and to work towards returning the party to where it belongs. He encouraged all Akatamansonians to support the party as the current state of affairs in Ghana is not looking great with increasing fuel prices and hardship

The gathering was to socialise, interact and brainstorm on the general state of affairs of Ghana. The program was attended by members from various branches of the UK & Ireland Chapter and a representation from Scotland.

Speakers who addressed the gathering decried the current state of insecurity in Ghana and urged the non-performing NPP Government to sit up and provide peace and security for the citizenry for businesses to thrive and the general safety of the Ghanaian. The program was held on Sunday 26th September 2021.

The chairman of NDC Birmingham Branch, Yakubu Ibrahim, tasked members not to lose hope but to continue to work hard towards annexing power in 2024 for NDC to return to power to provide security for all.

During the open forum, Ghanaians lamented on the rising cost of living in Ghana and increases in the remittances to families back home in the last few years. They appealed to the Akuffo-Addo government to cut down on profligate spending and wastage - as well as corruption and to channel the resources towards job creation for the teeming unemployed youth.

On his part, the NDC UK & Ireland Chapter Chairman, Alhaji Alhassan Mbalba, encouraged Ghanaians in the diaspora to continue to mobilise and harness their energies in readiness for ROPAL implementation.

This he said, NPP will seek to use ROPAL to rig the next elections and encouraged Ghanaians to vote for the NDC when the time comes for prosperity and the better management of the country and to kick out this nepotistic NPP government.

The NDC-UK & Ireland Chapter Secretary,  Mr Michael Dzidula Kudiabor said he was delighted to see many women at the event and admonished the women to keep it as it is in line with NDC’s philosophy- social democracy. He emphasised that the NDC won the 2020 elections but the verdict was stolen. He encouraged members not to lose hope but continue to work hard for victory come 2024.

The women's Organiser of the Chapter and Branch, Madam Mary Gardiner and Jamilatu Yakubu respectively, both encouraged women to join the front line politics and not to leave it for the men alone. They both encouraged women to via for the higher positions and not to settle for the women organisers position pointing to Professor Nana Jane Opoku Agyemang. They tasked the women to be brave and fight for their positions at the front seat. Jamilatu said “ no more back room roles for women, front seat we come”.

Freddy, the Chapter Youth Organiser, tasked Ghanaian Students living in the West Midlands (especially Birmingham, Wolverthampton and Coventry) to liaise with the Youth Wing of the party towards the upcoming launch of the “Youth and Women Wing Conference” in October. He said the 2024 election shall be a “do and die affair”. The youth must fight to ensure NDC Returns to power to implement its policies for the teeming Youth.

Alhaji Sannie Awudu and representatives from the Zumunta Community as part of the Zongo Caucus, tasked the large and teeming Zongo Caucus to not lose hope in the party but to remain hopeful of our return to power.

The Executives of Birmingham branch thanked all members for their wonderful support and encouragement. And for helping make the program a great success.