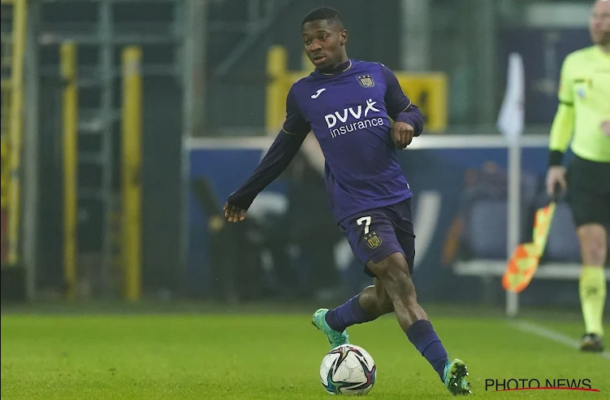 Coach of Belgium giants Anderlecht, Vincent Kompnay has sang the praises of his young winger Francis Amuzu over his recent good form.

Coming through the Anderlecht youth ranks alongside Jeremy  Doku who now plays for Stade Rennes, Amuzu was seen as the better player than Doku but it appears his development has stalled but his talents are glaring.

He has been in and out of Vincent Kompany's Anderlecht set up but is highly rated but has failed to consistently show what he can do although he always shows glimpses of what he can do.

In recent months (and years) Amuzu was not sure of his place at Anderlecht, but seems to have regained his place in the first eleven in recent weeks.

He enjoys Vincent Kompany's confidence and thanked him with some great performances. It also brings praise to the Anderlecht coach. Francis Amuzu is the best example of this rise in power of several young people. While he's the hottest example due to his hat-trick, he's not the only one enjoying this change.

"One of the big lessons in football is that trust is key. She's like a cat (sic), one day she comes to eat at your house and the next day he doesn't show up. And in the more hollow moments, he You have to stay consistent. The work done by a player like Francis creates his own confidence."

He has scored nine goals this season and has five assists after 43 games.