Andy Yiadom to return in January 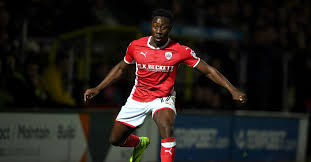 Ghana international Andy Yiadom will be back in action for Reading in January following injury he sustained at training.

The full-back has been sidelined for a couple of weeks and can't feature for the Royals in their next 4-5 games.

The 25-year-old underwent a test which reveals his return to the field can only be guaranteed in early next year.

“Andy Yiadom might be out until the end of January,”  manager for the Championship side Mark Bowen said.

The former Barnsley was signed on a four-year deal following the expiry of his contract at Oakwell on 1 July.

Yiadom made 64 Championship appearances for the Tykes after signing on a free transfer from Barnet in May 2016.

His absence could be a worry for Reading who are aiming to make a return to the Premiership next season.