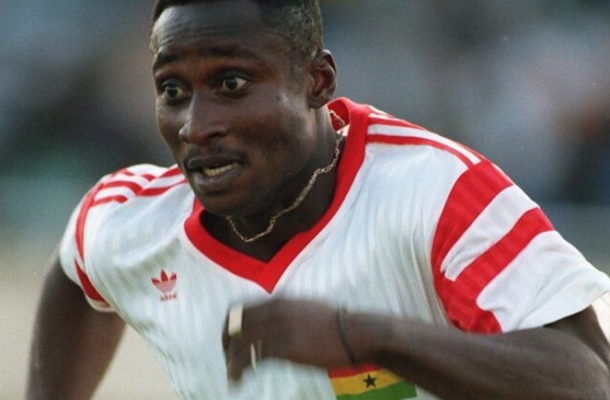 It is twenty two years now since that fateful day in Senegal when the golden generation was supposed to exorcise the demons that had haunted Ghana since wining the AFCON title in Libya 1982 when Abedi Ayew Pele was then a scrawny little 18 year old fela.

A lot of stories have been told about captaincy causing disruptions and leading to Ghana missing out to our neighbours and perennial rivals Ivory Coast in the 1992 finals.

One of the main characters in the whole charade Tony Yeboah who barely talks to the media has granted a rare interview to the veteran Kwabena Yeboah on GTV Sports Plus last week.

Here the tough and straight talking Yegoala did not mince words as he says he was hurt and disturbed when he was snubbed for a then rookie Tony Baffoe for the captain's arm band when he was the vice captain to Abedi Ayew who missed the finals due to accumulated yellow cards.

According to Tony Yeboah he was informed by the then coach Otto Pfister that a letter had arrived from Ghana instructing them to make Tony Baffoe the captain for the finals.

The former Okwahu United striker says this greatly affected the team especially the Kumasi Caucus which he was leader. 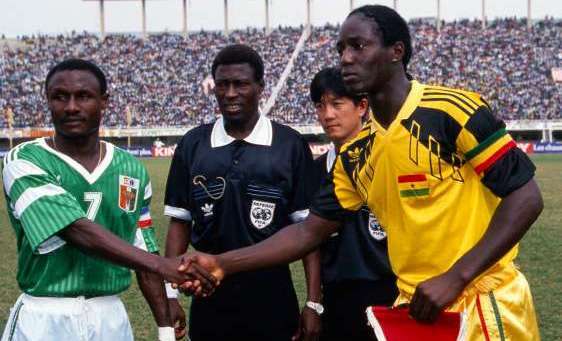 Tony Baffoe (right) wearing the Black Stars captain's armband“To be honest I was very surprised and at the same time, the Kumasi group was shocked so it was affecting us during the game. They knew I was assistant captain,” Yeboah said in an interview with Kwabena Yeboah on GTV.“That time Tony Baffoe was new in the national team and shouldn’t have been captain. I think this situation affected us a lot. Before the game, Otto Pfister told us that we have a letter from Ghana that Tony Baffoe should be captain. Everybody was shocked and it affected the team,” he said.

Reports of a stormy team meeting before the final when Yeboah left Pfister in no doubt about how he felt have consistently made the rounds and Yeboah freely admits that captaincy row “definitely on my mind.”

“I was a little bit angry. I will try to score, I hit the bar, it wasn’t working and we lost the final,” he adds.

Black Stars lost the trophy after failing to beat the Ivorians on penalties after a goalless draw in regulation time.

Tony Baffoe missed the decisive penalty which handed the Ivorians the title after a marathon 11-10 penalty kicks.

According to Tony Yeboah the remnants of 1992 has followed the Black Stars till date as with all the talents at our disposal petty squabbles,egos, money make us press the self destruct button even before a ball is kicked at tournaments.

He says: “Every tournament, we seem to have a little problem and football doesn’t work like that. The team has to be together, you need unity. Since we didn’t win in 1992, you can see there is a problem either with captaincy, money or something. We have fantastic players but these things affect us.”