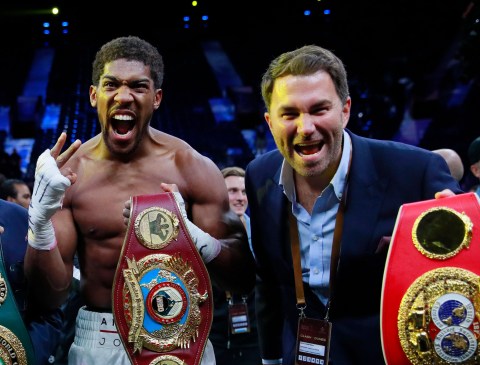 Anthony Joshua said he is ready to fight Oleksandr Usyk next as Eddie Hearn hinted the heavyweight would not be vacating any of his world titles.

Victory over Andy Ruiz saw Joshua reclaim the WBO, IBF and WBA (Super) titles, but two mandatories are set to be called on those belts.

The WBO insisted after the fight on Saturday night Joshua must face Usyk before 4 June, while the IBF are also set to order AJ to take on their mandatory challenger Kubrat Pulev.

Joshua responded to the WBO’s statement in his post-fight press conference, saying: ‘In 180 days? Lets rock and roll mate. Usyk? No problem.’ Usyk is the WBO’s mandatory challenger.

It was expected Joshua will be forced to vacate one of his world titles, but Matchroom boss Eddie Hearn feels an agreement could be reached with the governing bodies.

Joshua will take some time off before fighting again in the summer and Hearn refused to rule out the possibility the British heavyweight could fulfil both mandatories in 2020. ‘There’s an IBF mandatory and WBO mandatory, tonight is about celebrating the victory,’ Hearn explained.