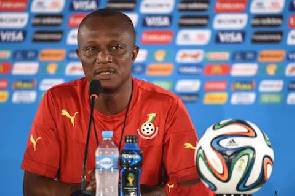 The four-time African champions will make it a fourth straight appearance at the global showpiece should they secure a ticket to Russia 2018.

At the 2010 event in South Africa, the Black Stars attained their best ever performance, reaching the quarter-final before falling to Uruguay on penalties.

“There are no little or big teams in modern football,” Appiah told Fifa.com.

“The game has developed in Africa and every opponent is strong now.

"If Ghana are going to qualify, then they will have to prepare for every match.

“We can’t just rest on past achievements, no matter how glorious the past was."

Ghana have been drawn in Group E, also comprising Egypt, Congo and Uganda.

Coach Avram Grant's charges commence their campaign with a home game with Uganda in October.

Appiah continued: "First and foremost, we need to take a close look at how Egypt, Uganda and Congo play and at their best players.

"As long as we play our best football, we’ll qualify. It’ll be a far from easy task, though.”

Appiah guided Ghana to the last World Cup in Brazil where they suffered a first ever group stage exit.