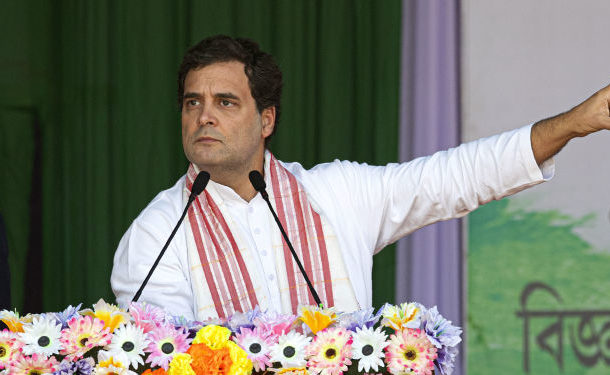 India's principal opposition party, Congress, has been criticising the Modi government on various issues such as economic slowdown, high oil prices, unemployment, and the sale of government firms. Congress has also criticised the government's $266 billion stimulus to handle COVID-led disruptions, saying that it is not a direct fiscal stimulus.

Referring to the nosediving economy and skyrocketing COVID-19 cases, Congress leader Rahul Gandhi on Monday slammed the government led by Prime Minister Narendra Modi saying it has put India ahead in every wrong race.

Comparing the Modi government to an ostrich that buries its head in the sand in the face of danger, Gandhi said, "The Modi government first creates problems for the country. And then, rather than looking for solutions, it starts behaving like an ostrich".

"India is ahead in every wrong race, courtesy the Modi government", Gandhi added.

Rahul Gandhi tagged a news article published in Modi's home state Gujarat in which reports claimed that the sale of shrouds had increased ten-fold due to COVID-19 deaths.

On the COVID-19 front, India has overtaken Brazil to become the second most-affected nation, with 4,204,613 cases. On Monday, the Indian Health Ministry reported 90,802 cases in the last 24 hours. The country has added over one million cases in the last two weeks. The pandemic has claimed 71,642 lives as per data from the ministry.

©
AP Photo / Rajanish Kakade India Needs to Rework Strategy as COVID-19 Cases Mounting Exponentially: Medical Research Chief
On the economic growth front, India's GDP contracted during April-June by 23.9 percent in comparison with the same period last year. The country was under a full national lockdown from the end of March until June in an attempt to curb and prevent the spread of COVID-19, bringing economic activities to a standstill.

However, data suggests that the Indian economy was slowing down even before the pandemic hit. India's GDP fell from 8.2% in early 2018 to 3.1% in January-March 2020.

Renowned economist and former governor of the Reserve Bank of India Raghuram Rajan said "the ongoing pandemic-induced economic crisis is likely to worsen" as people may cut down their spending to tackle the crisis.

"Without relief measures, the growth potential of the economy will be seriously damaged", Rajan wrote in a post on LinkedIn on Monday.

Rajan said that the government and its bureaucrats need to be frightened out of their complacency and into meaningful activity.

"India needs strong growth, not just to satisfy the aspirations of our youth but to keep our unfriendly neighbours at bay", Rajan, currently a professor at the University of Chicago, advised while adding that "if the patient has atrophied, stimulus will have little effect".