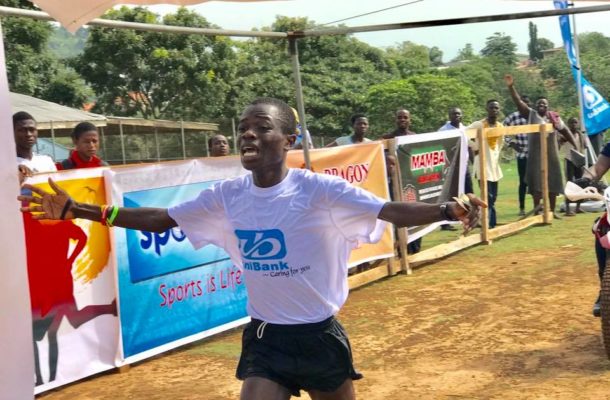 The defending Champion of the Ashanti Akyem Marathon William Amponsah has confirmed he will arrive  on Sunday,saying he is coming to challenge his "own time."

Amponsah will arrive at Agogo with high expectations to replicate his splendid performance he exhibited in the maiden edition where he won the then 20km race.

He said he is looking forward to improving his performance and not to challenge humans.

In a wide range interview with ghanaguardian.com's Fiifi Abdul Malik from Nkawkaw where he competed in another  Marathon, the teenager downplayed any negative effect of  pressure during the Easter Monday competition, while admitting the difficulty involved in running the upcoming 42 km race.

"I am ready for the Asante Akyem race and I am not under any pressure or another am I looking at what others are bringing, he said.

"I have done all the preparation needed, well focused and coming to challenge my own time and not human beings.

"The full marathon training is not easy but anything is possible with God."

Amponsah  competed in the Nkawkaw Marathon on Saturday, just 48 hours ahead of the main race at Asante Akyem.

Despite clocking  2 hours, 1 minute to come  third race, Amponsah expressed satisfaction with his performance, saying it offered him the avenue to test his "endurance."

"I'm at Nkawkaw now and we will come Asante Akyem tomorrow dawn,"he said.

"I wanted to test my endurance before Monday's race so I came here to compete and I placed third.

"I was leading and two people suddenly passed by me not knowing I'm just close to the finish point.

"I was having no Idea about the distance so I was just running. I had no idea of the race distance but the route was more of hills.

William Amponsah won the first edition of the Asante Akyem Marathon, which was  a 20km race within the clocked 1:12:14 and as part of his prize, participated in the prestigious Dubai Marathon.

He lamenting some injury situations that nearly marred his preparation towards the Marathon, which has become one of the biggest races to be held in 2018.

"Many injuries during the preparation but I am fit for the race now,"he said.

"I know expectations are high after winning the maiden edition.It has been increased to 42km and that is the different challenge."

Organisers have decided to increase the race from 20km to  42km  to conform to the standard marathon distance.

Asante Akyem Marathon Challenge is to help promote long distance and marathon running in the northern part of Ghana and also provide another opportunity for our athletes aside the  Accra Marathon.

It is a national open Marathon Run for both men and women to be staged in Agogo in the Ashanti Region.

The event is being organized by former Member of Parliament for Asante Akyem North, Kwadwo Baah Agyemang.