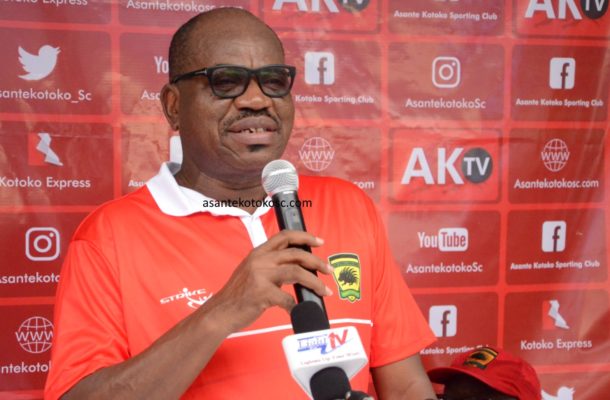 Management of Asante Kotoko has expressed its “dismay” at media reports of disunity amongst its rank and file and said the George Amoakoh-led team is united in its course to getting the club to reach new heights.

Reports were rife in the media this week of a supposed rift among members of management with some quarters suggesting the Chief Executive Officer, George  Amoakoh, has ‘threatened to resign if things did not change.

Management, in a release signed by Director of Communications, Samuel Sarfo Duku (Esq), on Friday, said there was absolute peace in the group.

It said the reports suggesting otherwise were figments of the imagination of distractive elements, whose desire to derail management from achieving its plans for the club.

"The management of Asante Kotoko has received with shock, speculations running in the media that there is a bad blood among members of the management team and that things have deteriorated to the extent that the chief executive officer has threatened to resign if things should continue this way," the statement said.

“Management wishes to state categorically, without any ambiguity, that these speculations are false and must  be treated with the contempt they deserve.”

“There are absolute unity, peace, and tranquility in the team and it remains focused in its quest to restore the club to its rightful position in the game of football.”

“Mr. George Amoakoh has at no point, in the discharge of his duties as the club's CEO, complained of unfair treatment and neither has he showed any signs of being frustrated by any member of the team.”

Management, as a result, has asked supporters of the club to disregard the rumors and rather channel their energies on supporting the group and the club, as a whole, to blossom in their chose path.

“In the light of the above, management calls on its teeming fans to disregard those distractive elements and rally behind the team to achieve its noble dreams," it concluded.