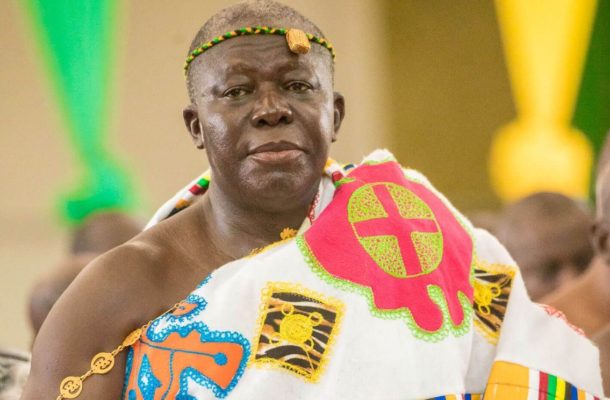 The Asantehene, Otumfuo Osei Tutu II, has deplored the uncompromising positions taken by both the Majority and the Minority sides in Parliament on issues bordering on national interest.
He said such intransigent stands did not augur well for the country’s democracy and could create room for an insurrection.

“When the art of governance becomes overly rigid and inflexible, it invites the search for an irresistible force and an unorthodox path for resistance. Or, if you like, when you tempt fate too often, you risk the danger of fate descending with unintended consequences,” he cautioned.

Speaking last Sunday night at the launch of the commemorative gold coin to mark two decades of his enthronement and also to recognise his peace initiatives, Otumfuo Osei Tutu called on both sides of the House to learn to concede and compromise.

“Governments must always have the humility to acknowledge and embrace useful inputs from all sources,” he said.

He said the good people of Ghana took great pride in their commitment to democratic governance and had been proud to be an oasis of peace in an “isle of torrent and our record as a thriving democracy has served us well”.

The Asantehene, however, observed that “democracy is not a static object; nothing in statecraft really is. Democracy is work in progress”.

He said the situation where the Majority allowed the Minority to have its say, while the Majority had its way could not be allowed to continue and called on the House to try to meet each other.

He said one word that had come “to symbolise the life blood and soul of democracy is ‘compromise’”.
“Whether you are navigating through the labyrinths of international diplomacy or confronting the intractable issues of domestic politics, from the United States to Germany, from Israel to
Japan, through all the land proclaiming their faith in democracy, the name of the game is compromise,” he said.

Otumfuo Osei Tutu encouraged Members of Parliament (MPs) to continue to do their best, as the electorate was watching their performance and would decide their fate at the end of the day.

“The people listen, observe and weigh what their leaders do over time and pass their judgment at the appropriate time. So our parliamentary representatives can be assured that their contributions in the House are not wasted.

“The people have noted them and, no doubt, they will reflect on them when the time comes to determine the next phase of our governing process,” he said.

That notwithstanding, he cautioned MPs not to arrogate to themselves the powers with which they had not been clothed.

According to the Asantehene, “our representatives should bear in mind that it is not their role to either determine policy for the Executive or frustrate the Executive from performing its legitimate role”.

He asked MPs to turn down the temperature and allow the process of governance to proceed, “so that the people will retain their exclusive rights to pass judgement on how they have been governed at the appropriate time”.

“We elect people to represent us to make sure there is some equilibrium in what governments do. It is good that our representatives in Parliament subject the national budget to the most rigorous scrutiny and to call for changes,” he added.

The Vice-President, Dr Mahamudu Bawumia, eulogised the Asantehene for his role in peace-building in the country, particularly his role in resolving the Dagbon chieftaincy crisis.

He said the Asantehene had been very instrumental in the transition of power after every general election in the past 20 years.

Therefore, according to Dr Bawumia, the commemorative gold coin to celebrate the Otumfuo as a pillar of peace in the country was worth it.

The Governor of the Bank of Ghana, Dr Ernest Addison, explained that the coin, which was minted by Gold Coast Refinery, was not legal tender and as such would not have any monetary value.

“The gold coin will be of no monetary value. By that, it means it will not be a medium of exchange and not exactly legal tender,” he explained.

Accordingly, he said, the coin would not display any face value to avoid the risk of being confused with legal tender coins in circulation.

The first coin was bought by the Executive Chairman of the KGL Group of Companies, Mr Alex Dadey, at GH¢1 million.

The Ghana Gas Company Ltd also bought one at GH¢200,000, while the ministers of Food and Agriculture and Trade and Industries, Dr Owusu Afriyie Akoto and Mr Alan John Kwadwo Kyerematen, respectively, bought a coin each at GH¢50,000.

Proceeds from the auctioned coins will be used to establish a multipurpose cultural resource centre in Kumasi to promote activities relating to traditional and customary conflict resolution in the country.

The black-tie ball attracted the crème de la crème of Ghana’s business players and politicians, with most of the male guests in three-piece suits, while the ladies were in their dinner dresses.

Very few guests wore traditional attire at the event which was powered by the E ON 3 Group, an Accra-based Ghanaian business solutions provider, working with the Precious Minerals Marketing Company (PMMC) Limited and the Manhyia Palace.

The marquee tent which served as the event centre was draped in black gold, giving the venue an exquisite ambience.

Prominent among the patrons were the Chief of Staff at the Presidency, Mrs Akosua Frema Osei-Opare; the Chief Justice, Justice Kwasi Anin Yeboah; the Attorney-General and Minister of Justice, Mr Godfred Yeboah Dame; the Minister of Information, Mr Kojo Oppong Nkrumah, and the Minister of Lands and Natural Resources, Mr Samuel Abu Jinapor.

Access Bank is the official banking partner of the Otumfuo commemorative gold coin with respect to receiving all funds at the auction, while Coronation Insurance is the insurance partner.

Minted at the Gold Coast Refinery in Accra, the 99.99 per cent assay at 24 carat fine gold coins, 37 millimetres in diameter and weighing 31.104 grams each, will be safeguarded in the vaults of the PMMC Ltd.

The face of the coin bears the image of Otumfuo Osei Tutu, with the Adinkra symbols ‘Bi Nka Bi’ and ‘Mpatapo,’ which are symbols of peace, harmony and reconciliation.

The back or the reverse bears an image of the Golden Stool (Sika Dwa).

Speaking at the launch, the Board Chairman of Access Bank, Mr Frank Beecham, commended Otumfuo for his immense contribution to the peace the nation enjoyed.

“I commend His Royal Majesty Otumfuo Osei Tutu II for his sterling leadership over the past two decades and for serving as a beacon of unity and progressive development in the country.

“Together with my fellow directors, management and staff of Access Bank (Ghana) Plc, we are honoured to be associated with His Royal Majesty on this memorable occasion,” he said.