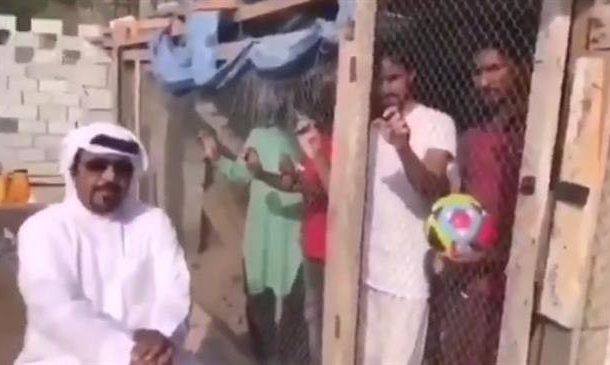 An Emirati man has reportedly confined a number of Asian migrant workers inside in a bird cage, and forced them to declare support for the United Arab Emirates national football team, nicknamed The Whites, during the 17th edition of the AFC Asian Cup in order to be set free.

A one-minute-long video, circulated online earlier this week, shows the UAE national, whose identity was not immediately known, sitting on a chair as eight Asian male workers are barred inside a large bird cage.

The man says in Arabic that his country's national team will be playing against the India squad in an apparent reference to the Group A fixture at Zayed Sports City Stadium in Abu Dhabi on Thursday.

The Emirati boss then asks the caged workers "which team are you supporting?" and the Asian men respond "India!"

Later on, the man says that the workers’ response was not proper, and that they must support the UAE national team as long as they are living in the Persian Gulf country.

The caged men reply by proclaiming their support to The Whites when asked for the second time, after which they are released.

Under pressure and threat of an embarrassing early exit, the UAE national football team rebounded from its opening 1-1 draw to Bahrain, and could clinch a nervy 2-0 victory over the Indian outfit – nicknamed Blue Tigers.

The circulation of the video on social media network has drawn strong condemnations, and prompted calls for the man's arrest.

Many foreigners, who are employed in the construction industry in some Persian Gulf Arab states such as the UAE, Saudi Arabia and Qatar, face exploitation and have little access to basic rights.

Various international rights organizations have called on the Persian Gulf Arab states to take urgent action to protect the rights of migrant workers.

The UAE has one of the world’s largest international migrant populations. Most of them come from India, Bangladesh, Pakistan, Egypt and the Philippines.Source: presstv.com