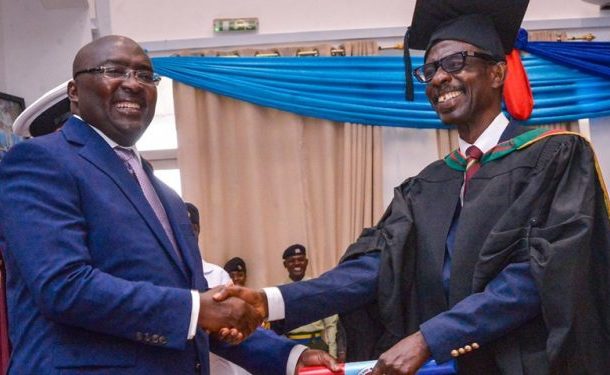 Dr Bawumia and Mr Asiedu Nketiah in a handshake

Dr. Bawumia who was the Guest of Honour for the Joint Graduation Ceremony of the Ghana Armed Forces Command and Staff College at Otu barracks in Accra jokingly said Mr Asiedu Nketiah taking steps to be John Mahama’s running mate.

Mr. Asiedu Nketiah graduated with Master of Science in Defence and International Politics on Friday and political rivalries were set aside as Dr. Bawumia congratulated his political opponent during the graduation ceremony.

“I am told he did not come here for physical muscles but he came here to beef up the intellectual capacity of the NDC and enhance his case for being selected as the running mate.”

“More seriously, I really want to congratulate my friend Johnson Asiedu Nketia. He has shown that it can never be too late to acquire knowledge and I think he has done well,” the Vice President added.
Dr Bawumia’s comments set the auditorium of Hamidu Hall of the Ghana Armed Forces Command and Staff College with laughter and cheers from the audience.

Popularly known as General Mosquito, Mr Nketiah was a member of parliament for the Wenchi West constituency from 1992 to 2000.He is the longest-serving General Secretary of the NDC, having won the position for the first time in 2008.In 2018, he beat his then-deputy, Koku Anyidoho in a landslide victory to retain his position for the third time.