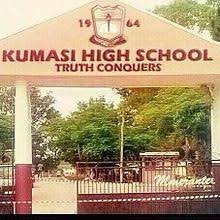 An Assistant Headmaster at Kumasi High School (KUHISS) has been suspended, pending investigations into allegations of sodomy against him.

The 54-year-old year old George Amponsah-Duodu, is accused of engaging in the alleged acts with students of the all-male school.

The Regional Education Directorate has referred the matter to the Disciplinary Committee for further investigations.

Appointed a teacher in 1996, Mr. Amponsah-Duodu, who is married with four kids, became Assistant Headmaster on November 12, 2015, after successfully passing an interview.

Among his topmost responsibilities is ensuring general discipline on campus and supervision of administrative and secretarial staff as well as act generally in the absence of the headmaster.

Some students of the all-male school accused the man in charge of their well-being on campus of sodomising them.

At least, four alleged victims, one of them a former student leader, have opened up to school authorities on their ordeal from the teacher.

Acting on the leads, authorities submitted a report to the Ghana Education Service, prompting further investigations.

Nhyira News has sighted a letter from the Ashanti Regional Education Directorate, asking Mr. Amponsah -Duodu to step aside pending completion of the process.

Regional Education Director, Mary Owusu Achiaw, issued the directive by a letter dated November 4, 2018, and copied the Chairman of GES Council, Director-General of GES and Metropolitan Director of  Education as well as  Headmaster and Board Chairman of Kumasi High School.

The letter states the suspension follows accusations by students of the school.

"Following allegations of sodomy against you by students of the Kumasi High School, you are hereby directed to step aside as the Assistant Headmaster (Administration) of the school to allow for smooth investigation into the case," the letter stated.

"Further instructions will be communicated to you after the investigations," the directive continued.

Nhyira News sources say the affected students have been undergoing counselling in school as school authorities decide their fate.

Mr. Amponsah-Duodu, however, denies any wrong-doing but declines to speak on record.

He insists he will direct all question on the issue to the Regional Education Director. Source: myjoyonline.com