The Association of Liberian Journalists in the Americas (ALJA) Tribute Delivered by Mr. Moses D. Sandy, National President at the Memorial Mass for the Liberia Broadcasting System(LBS), James Kpateh Wolo 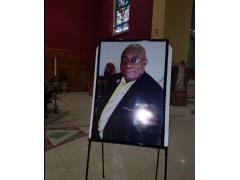 The Pennsylvania Liberian Community
The Officiating clergy
The church
Distinguished ladies and gentlemen:
My name is Moses D. Sandy. I am the ALJA National President. The acronym ALJA represents current and retired Liberian journalists residing in the Americas. ALJA seeks to foster companionship between its members and their American counterparts. The organization is also, committed to the advancement of press freedom and the principle of good governance in Liberia.

We assemble today,Saturday, October 1, 2016, to again pay homage and bid final farewell to another fallen Liberian journalist, Professor James Kpateh Wolo, who departed this world on September 9, 2016, at the John F. Kennedy Memorial Medical Center in Monrovia, Liberia, West Africa, following a brief illness. The late Professor Wolo, we understand died at age 70. His demise follows the death of several promising, industrial, and dedicated Liberian Journalists who passed early this year. Since the start of this year, it saddens me to report that the local Liberian Press Corps has been inundated with the death news of several Liberian journalists. As we were preparing for this memorial mass, On Wednesday, September 28, 2016, we were again hit with the death news of another Liberian Broadcast journalist, Oscar Dolo, formerly of the Talking Drum Studio in Monrovia, Liberia. Mr. Dolo, we were told, died at the Phebe Hospital in Bong County after a brief medical complication.

The pace at which death has claimed the lives of several members of the Liberian media in recent times, remains a misery for the Press Union of Liberia(PUL) and ALJA. We are still puzzled about what is happenning to our community, especially at the local level. We regret Mr. Wolo's death and the level of tragedies that have afflicted the Liberian Press Corps in recent times.

It is exactly twenty eight days now since September 3, 2016 when I at the head of an ALJA delegation traveled to Staten Insland in New York to perform similar function and participate in the funeral of Journalist Togar Lawrence Randall, who also, departed this universe on Augusst 10, 2016 in Washington, DC after a protracted period of illness. The late Randall died at the George Washington University Hospital. He was a graduate student at the Washington based Georgetown University. Today is a difficult moment for the Wolo family, ALJA, and the entire Liberian Press Corps at home and abroad because this day marks the final home going of one of the heroes in contemporary Liberian journalism. Literally, Mr. Wolo, alias Kpateh, which in the Kru dialect means, the messenger, was in deed a gaint in the Liberian press. In the media, the late Kpateh was the go to person. He was knowledgeable, experienced, and friendly.

In the words of the President of the PUL, Abdullah Kamara, "Professor Wolo was a very resourceful person to media development in Liberia. He was always around the PUL whenever we needed him. He did not stop one day giving us good advice on how to run the affairs of the Union." Mr. Kamara's description is a true reflection of the man we knew. James was generious and always willing to help. His death is irreparable. Mr. Wolo's death is not only a loss to Liberia, but a devastation to several individuals, who he interacted with on the African continent. Mr. Ben Dotsei Malor, former spokesperson of the United Nations Mission in Liberia(UNMIL) and a former co-worker of him in a tribute wrote "This is a great loss, not just to Liberia, but also, to his numerous friends, family, and schoolmates in Ghana." Mr. Malor, who previously worked for the famous British Broadcasting Corporation(BBC), also, worked with Mr. Wolo in Liberia. Both men worked at UNMIL.

ALJA and the Liberian society in general have lost a towering development communicator and erudite writer. Many of us who resided in Liberia in the 1990's still remember the late Wolo's handiwork, the inspirational radio program, "Though for Today," that was aired on the Liberia Broadcasting System(LBS) radio. James used his creative writing skills to educate, entertain, and unify Liberians during the civil war when peace was most needed. We, like the Wolo family and the families of other deceased journalists, are distraught, but we take consolation in the immeasurable contributions Mr. Wolo and the others, who predeceased him made for the betterment of our native land, Liberia. We are proud of the outstanding services they rendered our people and country. They were the voice of the voiceless in our country.

As journalists, the late Wolo, Oscar Dolo, Togar Lawrence Randall, Mamadee Diakite, and others helped in bridging the communication gap in Liberia. They played meaningful roles in shaping the Liberian political landscape. By Liberian standard, the late Wolo was an accomplished journalist, writer, administrator, and professor. He reached the pennicle of his journalism career. He held several high profile positions in the Liberian media. He was former Deputy Minister for Administration, Ministry of Information, Culture Affairs and Tourism(MICAT), former Director General, Liberia Broadcasting System(LBS), Professor, Development Communication, Mass Communications Department, University of Liberia, among others. As media executive, administrator, professor, and writer, Jame's presence was felt on the African continent, especially in Liberia.

He schooled and open doors for many Liberian journalists including me, who passed through his hands. At LBS, when Mr. Wolo was Director General, several LBS staff including me on the basis of competence and commitment were promoted to various managerial positions in the news and radio departments. As a former boss, the late James was humble, jovial, supportive, caring, and knowledgeable in the performance of his duties. He was not a biggot; he was not arrogant or condescending in relating to his peers and subordinates. He had the ability of working with any body regardless of social or ethenic orientation. Professor Wolo, we are saddened by your demise, but we take comfort in the memorial time spent together while with us. Your days on earth were not in vain; you succeeded. The outstanding roles you played in Liberian journalism will forever be remembered.

To Mrs. Mrs, Wolo, the children, and the bereaved family, ALJA sympathizes with you for the loss suffered. We urge you to take courage; the Lord is in control. We empathize with your agonies, but all is not lost. May the Almighty God grant the entire bereaved family the strength and courage as you mourn the home going of our beloved boss and professional colleague, James KpatehWolo. May his soul and those of all fallen Liberian journalists rest in perpetual peace.