An Aston Martin just sold for $2.9 million and upstaged a fleet of classic Porsches 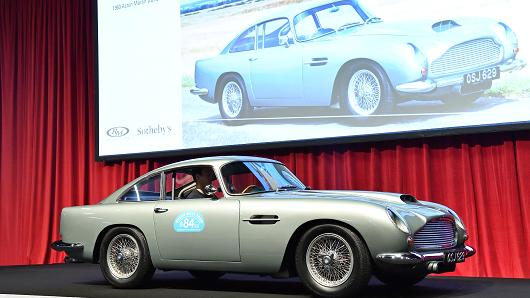 An Aston Martin, which sold for $2.15 million ($2.9 million), managed to steal the limelight at an auction in London which was supposed to showcase a collection of classic Porsches.
The 1960 Aston Martin DB4GT was auctioned at R.M. Sotheby's annual London sale on Wednesday evening which saw a total of £21.5 million change hands. The main focus of the event was a carefully curated collection of limited edition Porsches which mostly smashed their estimates.

Also failing to ignite excitement was "North by Northwest" movie star James Mason's 1965 white Mercedes-Benz with a red convertible roof and plush red leather and wood interior which sold below expectations at £120,000.

In total, around 76 percent of the lots for sale found buyers, largely in line with the 74 percent sales achieved rate at the same auction in 2015. Even a dedicated week of auto aficionado activity – beginning with the fifth anniversary of the prestigious Concours d'Elegance car show in its triumphant return to the U.K.'s Windsor Castle last week and including this weekend's annual classic racing car festival Goodwood Revival - wasn't enough to spark more buyer enthusiasm.

According to data from consultancy Knight Frank and the Historical Auto Group, the ten years' leading up to December 2015 saw classic cars reach a 490 percent return, thrashing all nine other collectible asset classes tracked in the Knight Frank Luxury Investment Index, which includes coins, art and stamps. Wine, with a 241 percent return over the period, was the very distant runner-up to automobiles.

Jammed on the brakes

But data from the Historical Auto Group's HAGI Top Index show classic car investors have jammed on the brakes this year, with selling price growth languishing around 2.21 percent (to end July) versus a 19.42 percent compound annual growth rate for the past decade spent in the fast lane.

So what are the cars that are holding or increasing their value in this challenging climate hiding under the hood?

According to Dietrich Hatlapa, founder of the Historical Automobile Group International: "Generally speaking, cars in very good condition or very original cars, with fully documented history and accessories have been holding up much better than those that have issues such as accidents, incorrect repairs, parts or missing documents."

In sum, the trio of proven provenance, scarcity and quality are key. An additional draw card is emotion. Speaking to CNBC at the auction, RM Sotheby's Chief Operating Officer Alain Squindo said: "Fundamentally, nostalgia is a big contributing factor to buying these kinds of cars".

He added an evolving buyer base, with differing sentimental attachments was indeed a driver behind the move towards the more modern and sporty range on offer at auction.

"The buyer base is still really diverse, however, we have new markets coming in. The Asian market in particular has been very actively buying at our events and we're seeing a lot of younger buyers coming into the market," he added.