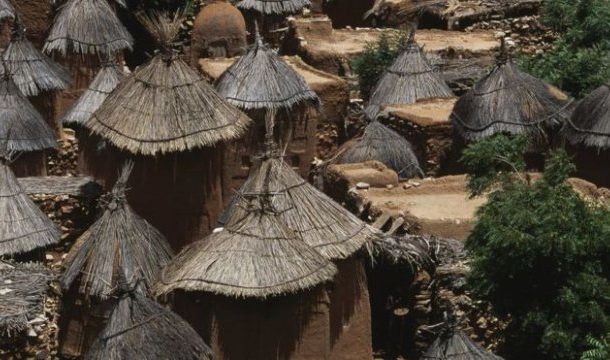 Nearly 100 people have been killed in an attack in a village in central Mali inhabited by the Dogon ethnic group, officials say.

The attack happened in Sobame Da, near Sanga town in the Mopti region.

The search for bodies is ongoing, but officials say 95 people have been found dead, with many of the bodies burned.

There have been numerous attacks in Mali in recent months, some ethnically driven, some carried out by jihadist groups.

Clashes between Dogon hunters and semi-nomadic Fulani herders are frequent.

Mali's government said "suspected terrorists" had attacked the village at around 03:00 local time. At least 19 people were still missing, it said.

But the mayor of nearby Bankass, Moulaye Guindo, told Reuters news agency that Fulanis from that district had attacked Sobane-Kou after nightfall.

"About 50 heavily armed men arrived on motorbikes and pickups," a survivor who called himself Amadou Togo told the AFP agency. "They first surrounded the village and then attacked – anyone who tried to escape was killed."

No group has officially said it was responsible for the attack.

"Right now we have 95 dead civilians. The bodies are burned, we are continuing to look for others," a local official told AFP.

What is the Dogon-Fulani conflict?

The Dogon people have lived in central Mali for centuries, and live a largely traditional way of life as settled farmers.

Many Fulani, on the other hand, are semi-nomadic herders who move across large distances in West Africa.

Friction between farmers and the roaming herders over resources is long-standing – but clashes between them have increased since a militant Islamist uprising in northern Mali in 2012.

Both sides accuse the other of carrying out attacks amid the unrest.

The Fulani, a largely Muslim ethnic group, have been accused of having links with the Islamist uprising. But for their part, the Fulani accuse a Dogon self-defence association, Dan Na Ambassagou, of attacks on them.

Is this attack unusual?

The attack on Sobame Da has killed about a third of its inhabitants.

In the same region in March, more than 130 Fulani villagers were killed by armed men wearing traditional Dogon hunters' clothing.

In March, more than 130 people were killed in an attack on the villages of Ogossagou and Welingara

After the attack, the Dogon Dan Na Ambassagou was banned by Mali's government.

But the organisation, which insists it is a self-defence group and had nothing to do with the killings, refused calls to lay down its arms.

The United Nations mission in Mali, in a report dated 31 May, said the security situation in central Mali "continued to deteriorate".

It said that clashes between the Dogon and Fulani had been "exacerbated by the presence of extremist groups", and that the central region had recorded the highest number of attacks against civilians.

Hundreds of people have been killed so far this year.

What effect did the Islamist uprising have?

There are several Islamist groups based in northern Mali. In 2013, they seized half of the country and were advancing on the capital, Bamako.

France, the former colonial power in Mali, and some neighbouring African countries, intervened – and pushed the Islamist groups back towards their strongholds in the Sahara desert.

Before the unrest, disagreements between the Fulani and Dogon were often settled through negotiation.

But the uprising - which had spread to the centre of Mali by 2015 - decreased government control and increased the availability of weapons.