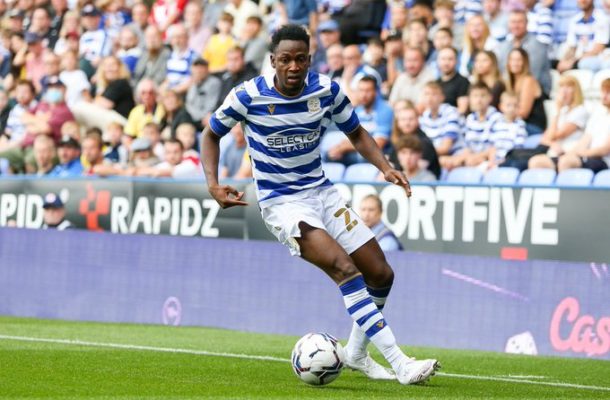 Baba Rahman recorded his first win as a Reading player as his side defeated Peterborough 3-1 in the English Championship.

He lasted the entire duration alongside compatriot Andy Yiadom in an entertaining game.

Tom Dele-Bashiru netted twice as Reading secured only their second Championship win of the season with a 3-1 home victory over fellow strugglers Peterborough.

In a drab first half, Reading were fortunate not to be behind and were grateful to rookie goalkeeper Luke Southwood for making stunning saves to deny Siriki Dembele and Ollie Norburn.

Reading opened up a 2-0 lead midway through the second half with goals from John Swift and Dele-Bashiru in the space of three minutes.

Both clubs had matching poor records going into the match, with only one win in seven league and cup outings this term - including five defeats.

Reading's problems have been compounded by nine first-team players missing due to injuries, the latest being number-one goalkeeper Rafael.

The Brazilian sustained a broken hand when reportedly punching a dressing-room tactics board in frustration after the 3-3 home draw with QPR on Saturday - and could be out for up to two months.

Southwood, a 23-year-old former England youth international, replaced Rafael for only his second league appearance for the club.

Peterborough, who lost 6-2 at Sheffield United on Saturday, started the brighter but, when Jonson Clarke-Harris tried his luck from a free-kick, the defensive wall held firm.

Pym also had few problems in dealing with a tame effort from Andy Yiadom.

Approaching the half-hour mark, Peterborough created the best chance of the game when Dembele galloped free.

His well-struck attempt proved on target but Southwood made a fine save to batter it away to safety.

Southwood did even better just before the break, flinging himself skywards to tip over a powerful long-distance drive from Norburn.

Reading suffered another injury setback in first-half stoppage time, with captain Liam Moore forced to hobble off, and the visitors tried to exploit his absence in central defence early in the second period.

But after a promising build-up and a weak home clearance, Conor Coventry fired wildly wide.

Reading had made little headway going forward but struck in the 64th and 67th minutes to take a surprise lead.

First, Swift thundered home a 25-yard free-kick to notch his seventh goal of the season.

Then, Dele-Bashiru latched on to a George Puscas cross to lash in his first goal for the club.

However, Peterborough reduced the deficit seven minutes later, when Thompson nodded in decisively at the far post from Joe Ward's free-kick.

But Dele-Bashiru stepped up again in the 88th minute, another fiercely struck effort whistling past Pym.