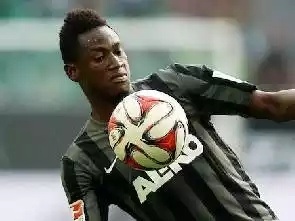 Ghana defender, Baba Rahman starred in Schalke's 3:2 win over Athletico Bilbao in their preseason game on Sunday.
The Chelsea on-loan player started the game from the bench coming in at the start of the second half to replace Sasha Riether.
The young left-back produced an impressive performance with a good show of confidence thrilling the 42,ooo fans present at the Veltins Arena.
Goals from Naldo, Klaas-Jan Huntelaar and Johannes Geis grabbed the goals for Baba's side while Mikel San Jose and Aritz Aduriz failed in their attempt to win the match for Bilbao despite their two goals.
Schalke returns to competitive football against FC 08 Villingen next Saturday in the DFB Cup and the young Ghanaian star will be looking forward to a good return to Bundesliga football following his impressive campaign for German side Augsburg last two seasons.
By Musah Abelyire/ghanaguardian.com
Twitter:@One_Real_Writer