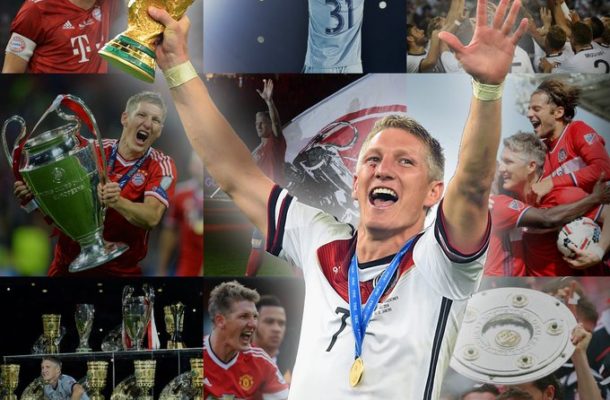 Former German International and captain Bastian Schweinsteiger has announced his retirement after a 17 year storied career  at the age of 35.

Born and raised in Rosenheim, near Munich, midfielder Schweinsteiger scored 68 goals in exactly 500 first-team appearances for Bayern Munich between 2002 and 2015, winning eight Bundesliga titles, seven German Cups, one League Cup and one Champions League - the latter part of an historic treble in 2013.

He also made 121 senior appearances for his country and was a key member of the Germany team which won a fourth World Cup in Brazil in 2014. Following the tournament, he inherited the captaincy from Bayern teammate and close friend Philipp Lahm.

Schweinsteiger left Bavaria in 2015 and signed for record English champions Manchester United, for whom he made a total of 35 appearances, picking up FA Cup and Europa League winners' medals.

In 2017, he moved to the United States to join MLS side Chicago Fire, where he scored eight goals in 92 appearances, the last of which was on Sunday, a 5-2 victory away to Orlando City.

"The time has now come and I will be finishing my active career at the end of this season," Schweinsteiger announced via Twitter, thanking his former clubs, the German national team, his family and his wife, former world number one tennis player Ana Ivanovic.

"Saying goodbye as an active player makes me feel a little nostalgic, but I am also looking forward to the exciting challenges that await me soon. I will always remain faithful to football."

Schweinsteiger has not yet made public his plans post-retirement, but one destination could be the German Football Association (DFB).

"We'll always have a place for him here," said national team coach Joachim Löw, who led Germany to that 2014 triumph in Rio de Janeiro and is currently preparing the side for the 2020 European Championships.

"I don't know what his plans are but any former player who wants to become a coach, whether doing their badges or coaching our youth teams, is always welcome," added Löw, who recently had Schweinsteiger's former Germany teammate Miroslav Klose on his staff, coaching the strikers.

Speaking at the German Football Museum in Dortmund, Löw described Schweinsteiger as "one of the greatest players that Germany has ever had" and said that the image of him bloodied up during the World Cup final will forever remain etched in fans' memories.

"He fought until he dropped," he said. "You could sense his will to win in everything he did."